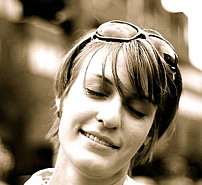 A classical violin student, Marie-Claire Saindon first showed an interest in composition while in high school, where she wrote and produced her first musical, “Jeanne”. She was then able to publish her first women’s choir piece, “Le train d’hiver” in 2006, which then inspired her to write more often for that specific choral voicing. While studying folk violin in her spare time, Ms. Saindon completed a Bachelor’s degree in Composition at the Schulich School of Music (McGill) in 2007 and a Master’s degree in Composition: Film and Multimedia music at Université de Montréal in 2010. In 2013, she won first place in the SOCAN Young Composers’ National Awards in the Godfrey-Ridout vocal category with her choral work Øst for vinden (2012). She has since then been commissioned by many ensembles, including Concerto Della Donna, a women’s vocal ensemble in which she also performed from 2009 to 2014.

Blinded by a Leafy Crown

SSAA a cappella (for two SSA choirs) – CP 1809 – duration 6:20
In her poem “Leaves”, Sarah Teasdale compares her faiths and beliefs to leaves – of a tree, or, in her very evocative analogy, a crown of leaves. This is a piece for two treble choirs, begins with the falling of our faiths, one by one, as voices intermingle like autumn leaves: one choir remains on the beat, and the other weaves on through with syncopations. As we look back at the past, during a time when our faiths still had a stronghold, the music becomes joyous and carefree. But it does not last long. When the sadness of the loss of the leaves takes hold, the music grieves a while, until the full realisation hits us: “Blinded by a leafy crown / I looked neither up nor down”. This is the most
stately moment of the text: simple but to the point. What follows is then a celebration of all the new things we can experience now that we are rid of our old blinders and prejudices. The music swells and expands in extasy of our new freedom, and ends in hushed humility and gratitude.

SSAA with keyboard or strings – CP 1440 – duration 12:00
Individual movements listed below.
Grand in scope and poignant in effect, Marie-Claire has written this wonderful work for women’s choir. Poems from three different sources illuminate aspects of the immaculate conception.

SATB a cappella – CP 1808   – duration 2:30
SSAA a cappella – CP 1805
Shrieks of sun, colours of the ocean, rock, crackling ice, shivering snow and wind; Terre-Neuve is a love-letter to the powerful geology and ancient mysteries found on the east coast of Canada.
SSAA version – commissioned by Elektra Women’s Choir
SATB version – commissioned by the National Youth Orchestra of Canada

Méditations de la Vierge Marie, originally written for a Christmas concert which focused on the Virgin Mary, is a triptych portraying different thought processes that one could imagine the Holy Mother going through once she’s learned of her new saintly role. Originally set for women’s voices and a string quartet, the songs are simple, yet evocative.

The first movement, L’annonce, sets a text by Albert Lozier, who mused at how a young woman – practically still a girl – would think about God’s plan for her, what she had previously hoped for in life, and how she herself plans to follow through with her new role. A very direct text, the music supporting it is a simple melody with simple harmonies – one could even say of a pastoral colour.

The third movement, Merci mon Maître (text by Albert Belzile), sets the speaker (in this case, one can easily imagine the Virgin Mary) talking directly to God, and trying to explain with how many ways one could express thanks for this Master that loves us unconditionally. The first part of the movement follows the text in its imagery: “Je veux te dire merci en psaumes, en langues, en fleurs sauvages, en météores lointains, en méduses célestes …” (“I would like to tell Thee [thank you] in psalms, tongues, wild flowers, distant meteores, celestial tendrils …”). We then come to a halt when the Virgin Mary realizes that words are far too limited to express in detail how to thank the Lord. And so, she simply says thank you – for loving us with an eternal love. There, the music opens up gradually to imitate this eternity, and finishes off simply with a last “Thank you”.