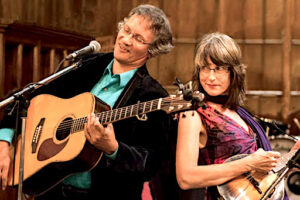 NAMING THE TWINS – the Robbie Smith and Kathleen Glauser duo – delighted audiences for over ten years. Their energy, casual banter, wide variety of song styles and remarkably well matched voices captivated audiences wherever they performed.
Robbie Smith was a songwriter, singer and player of stringed instruments all his life. From an early age, through the windows of his scenic home outside Shelburne Nova Scotia, his imagination took flight gathering scenes and circumstances which flowed back through his pen and onto the page. His lyrics captured the essence of life lived by and on the sea and the attention of Roger Whitaker who recorded four of Smith’s songs.
Kath Glauser joined Robbie in 2008. She brought clear natural folky harmonies, organizational skills and engaging stage presence to the table sharing lead vocals while adding guitar and mandolin. She helped with the song writing; lyrics and melodies. “Naming the Twins” recorded several albums.  visit the website here
Robbie passed away suddenly in 2019. Kathleen made a promise that the music would not be forgotten. So she contacted Tim Callahan-Cross at the Nova Scotia Choral Federation and a wonderfully invigorating project was born; to prepare Robbie Smith songs for choirs! Fine composers/arrangers across Canada were recruited to write choral arrangements and Cypress Choral Music has published several of the beauties below.
The following choral music was commissioned by the Nova Scotia Choral Federation with support from
the Estate of Robbie Smith, as part of the Robbie Songs Project – a Nova Scotian songwriter’s legacy.

Angels in the Snow

SATB with piano – CP 1944 – duration 4:15
SSA with piano – CP 2028
Snow minted branches bowed to us through frosted light
A raven welcomed us and led us through a world of white
A meadow glistened, we wonder-watched what we were shown
And, christening the fields, the only footsteps were our own

SATB with piano – CP 1996 – duration 4:35
TBB with piano – CP 2004
SSA available upon request
Everyone can relate to this compelling story. Perhaps we haven’t been stranded at sea with a broken mast but when we suffer through the storms of life hope on the horizon can bring deep relief.
I yearned to feel the ocean’s roll,
I was always the seafaring kind.
But too many storms have taken their toll,
and all that remains on my mind –
Is dry land, dry land –
It’s been seven fortnights since we raised the sail.
All hands, dry land –
We’ve slipped from the grip of a force seven gale to dry land.

SATB with piano – CP 1998 – duration 4:05
SSA with piano – CP 1973
TBB available upon request
Robbie invented the perfect word for a glorious day on the water. His melodies soar like seagulls in the salty breeze.
Find the gullwind in the harbour,
trace the tideline on the water, read the signs.
Catch the fish with lure and line,
bamboo pole and golden twine.
See the starfish shine.

Lay Down Your Weapons

Robbie Smith’s gentle nature often leads to lyrics that question mankind’s long-time propensity for conflict in the name of power and greed. They provide us with “A legacy of love that few can match” (Kathleen Glauser). This arrangement by Byron provides music with a classical feel as the original tune travels back to a folk-style from the Renaissance period.

Let's Have Some Music

SATB with Piano  –  CP 2024   –  duration 3:35
This is such a ‘good times’ song! When Kathleen Glauser (of the Robbie & Kathleen duo group Naming the Twins) approached me about writing arrangements of Robbie’s music, this song jumped out to me at a time when choirs had been unable to gather together for over a year, due to the COVID-19 pandemic. At the time (spring 2020), I was anticipating a resurgence of choral gatherings to come in the fall of 2020, and thought this would be a really fun song to focus on arranging, as a sort of personal celebration looking forward to this, and something choirs could enjoy singing when they returned. I think this piece has a wonderful positive message, and would work well in many different concert programs – it’s such a happy song!

SATB with Piano  –  CP 2016   –  duration 5:05
For this beautifully poignant song, I brought in a gentle and floating piano accompaniment that reharmonizes some of the melody differently from Robbie’s original harmonies. I have a few different ideas about who the narrator of my arrangement could be, and encourage performers to come up with their own interpretation and meaning. To help with this, I also suggest listening to the original recording by Naming the Twins, Robbie and Kathleen’s duo group, to compare and contrast with my arrangement. You can find their recording on YouTube.

Lullaby to an Ancient River

A fetching piano intro is followed by a solid sea shanty in 6/8 time, with a rousing swing. This arrangement is ideal for choirs at any level of ability.

I must down to the seas again, to the lonely sea and the sky,
And all I ask is a tall ship and a star to steer her by,
And the wheel’s kick and the wind’s song and the white sail’s shaking,
And a grey mist on the sea’s face, and a grey dawn breaking.

I must down to the seas again, for the call of the running tide
Is a wild call and a clear call that may not be denied;
And all I ask is a windy day with the white clouds flying,
And the flung spray and the blown spume, and the sea-gulls crying.

I must down to the seas again, to the vagrant gypsy life,
To the gull’s way and the whale’s way where the wind’s like a whetted knife;
And all I ask is a merry yarn from a laughing fellow-rover,
And quiet sleep and a sweet dream when the long trick’s over.

Sing the Winter Away

SATB a cappella – CP 2029 – duration 4:45
There have been many songs about going to heaven, such as the campfire singalong “Way Beyond the Blue”. Robbie’s song is simple yet profound and Michael has created gorgeous harmonies that will transport any listener to higher realms of glory.  This setting is designed for accomplished singers.
Some sweet day I shall wake up in a new land
Lift my eyes to the Heavens and behold
My soul will rise into the skies above the islands
And I shall know the glories of a story still untold

When the Carols Began

With a gentle triple-time lilt, this beauty addresses the Nativity theme in a surprising and delightful way.
Take the words make the words fill the hearts of men
Though words are mere shadows of what happened then
When heaven’s great treasure descended to man
That time-honoured night when the carols began

SATB with piano and instruments  –  CP 1961   – duration 4:05
SSAA with piano and instruments  –  CP 1975
TBB option available upon request
This is one of Robbie Smith’s most beautiful songs – in a minor key – and Erica has given it a stunning choral arrangement with sweet-spot vocal registers and interesting lines for each singer. The ideal instrumental accompaniment should include violin and recorder. However, this song would work well with almost any combination of C instruments. We also have a solo option for flute, violin, oboe or recorder.