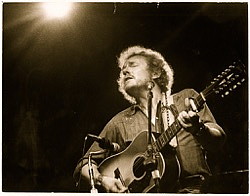 Gordon Lightfoot (b. 1938) is a Canadian singer-songwriter who achieved international success in folk, folkrock, and country music, and has been credited for helping define the folk-pop sound of the 1960s and 1970s. He has been referred to as Canada’s grea songwriter and internationally as a folk-rock legend. His songs have been recorded by some of the world’s most renowned recording artists, including Elvis Presley, Johnny Cash, Hank Williams Jr.,The Kingston Trio, Marty Robbins, Jerry Lee Lewis, Bob Dylan, Judy Collins, Barbra Streisand, Johnny Mathis, Richie Havens, Harry Belafonte, Sarah McLachlan, John Mellencamp, Peter, Paul and Mary, Glen Campbell, Anne Murray, The Irish Rovers and Olivia Newton-John. Robbie Robertson of The Band declared that Lightfoot was one of his “favorite Canadian songwriters and is absolutely a national treasure.” Bob Dylan, also a Lightfoot fan, called him one of his favorite songwriters, and in an often-quoted tribute to his fellow songwriter, Dylan once observed that when he heard a Gordon Lightfoot song he wished “it would last forever.”!

SSAA and TTBB available upon request
options: Guitar, Bass and Violin parts
One doesn’t need to be from Alberta to catch the enthusiasm of a prairie fanatic. Larry’s wife, Edna, comes from Lethbridge, where the trees grow at an angle because of the incessant wind – but where the finest crops of grain on earth are grown.
Oh the prairie lights are burnin’ brightThe Chinook wind is a-movin’ inTomorrow night I’ll be Alberta boundThough I’ve done the best I couldMy old luck ain’t been so good andTomorrow night I’ll be Alberta bound

SSAA and TTBB available upon request
options: Guitar, Bass and Violin parts
Considered by some to be Canada’s 2nd national anthem, this iconic song brings the listeners from coast to coast. I was commissioned by the Canadian Broadcasting Corporation to celebrate Canada’s Centennial in 1967.
There was a time in this fair land when the railroad did not run
When the wild majestic mountains stood alone against the sun
Long before the white man and long before the wheel
When the green dark forest was too silent to be real

SSAA and TTBB available upon request
options: Guitar, Bass and Violin parts
This is one of the most powerful pieces ever penned by legend Gordon Lightfoot. The irony, the poignant message, takes a person by surprize.
Rows of lights in a circle of steel
Where you place your bets on a great big wheel
High windows flickerin’ down through the snow

TTBB    with piano – CP 1790
options: Guitar, Bass and Violin parts
Many singers and audience members will remember this delightful folk song by Lightfoot.  “Wheels of love go ’round!” Dr. Sirett has created an approachable type of “round” with his skillful writing. Great fun!

In the Early Mornin' Rain

TTBB    with piano – CP 2102
options: Guitar, Bass and Violin parts
This classic song has been covered by many artists from Bob Dylan and “Peter, Paul and Mary” to Elvis.
In the early morning rain with a dollar in my hand
With an aching in my heart and my pockets full of sand
I’m a long way from home, Lord, I miss my loved ones so
In the early morning rain with no place to go

SATB with piano – CP 1377
options: Guitar, Bass and Violin parts
This song is a Gordon Lightfoot classic. Some say it’s the most beautiful Canadian folk-song ever written. It would work well at any concert, but especially for a Spring Concert.
LOOK & LISTEN

SSA with piano – CP 1891
options: Guitar, Bass and Violin parts
Erica has given an authentic treatment to the Gordon Lightfoot hit. We all need such people in our lives.
Rainy day people always seem to know when it’s time to call
Rainy day people don’t talk – they just listen till they’ve heard it all

Song for a Winter’s Night

SSAA – CP 1320
TTBB – CP 2098
Gordon Lightfoot ‘s lovely song – about relationships, light in a dark place, a warm refuge in the cold – needed an exquisite setting and Robin really hit the mark with this a cappella arrangement.
The lamp is burning low upon my table top
The snow is softly falling
The air is still within the silence of my room
I hear your voice softly calling
LOOK & LISTEN