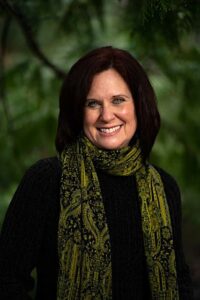 Erica Phare-Bergh has her M. Mus. in Choral Conducting from McGill University. A native of Montreal, she directed numerous choirs there from 1988-2010, including the Vanier College Choirs and the McGill Conservatory Choirs. She married and moved to Calgary in 2010, where she directed the choirs at William Aberhart High School, as well as Westwinds Green Choir, Savridi Singers and taught Music and French with the Calgary Board of Education. She is in demand as an adjudicator and presenter and was the guest conductor for the 10th Anniversary of the CBC-McGill Youth Gala. Now living in Victoria, British Columbia, she directs the Voices-in-Motion Choir, an intergenerational choir for those with Alzheimer’s. She and her husband, Rick, write children’s books together (A Song with Every Story Series), in which Erica incorporates both original songs and classical music into children’s stories. She is passionate about building cultural bridges through her arrangements of French choral music with Cypress.

A Place in the Choir

SATB a cappella  –  CP 1701   – duration 4:50
What is it about the nightingale that inspires so many poets? This lovely folksong gained popularity during the 1970’s with a recording by Nana Mouskouri. The Swingle Singers also recorded a beautiful rendition.  This setting by Erica has intuitive voice leading and long vocal lines – ideal for any choir!

optional violin and accordion parts are available upon request – no charge
Remove stockings from the mantel when the fireplace is in use!
Often considered to be Quebec’s first singer-songwriter, Mary Travers (known as “La Bolduc”) hit the peak of her career in the 1930s. She popularized the well-known turlutte (French Canadian mouth music) that is now synonymous with Québecois folk song. She wrote mainly political and satirical songs, but also a number of New Year’s songs, although this particular one is a Christmas song. Le bas de Noël, depicts the antics of a family as they meet to celebrate Christmas together. La Bolduc’s tongue-in-cheek tone is found even here in her non-political song.

This piece was premiered in 2007 as a commission by the CBC and was directed by Zimfira Poloz at the CBC-McGill Youth Gala Concert in Montréal. It is the second arrangement of three songs by La Bolduc, originally entitled, La Bolduc en fête. It now forms part of Dr. Laurier Fagnan’s series, La série enchantée.

SATB with piano  –  CP 1752
optional violin and accordion parts are available upon request – no charge
Mary Travers (known as “La Bolduc”) wrote mainly political and satirical songs, but also a number of New Year’s songs like this one. It speaks of families getting together for New Year’s – the good old times, the hugs and kisses, the gastronomical list of treats and of course, Grandma’s meat pie (tourtière). This arrangement is part of Dr. Laurier Fagnan’s series entitled La série enchantée

SSA with piano  –  $2.75    CP 1595
Evangeline is an epic poem that was written by Henry Wadsworth Longfellow in 1847. It describes the betrothal of a fictional Acadian girl named Évangéline Bellefontaine to her beloved, Gabriel Lajeunesse, and their separation when the British deported the Acadians from Grand-Pré, Nova Scotia, during the Bay of Fundy Campaign in 1755. The poem follows Evangeline as she spends years in search of Gabriel across America; sometimes she is near Gabriel without even realizing it. As an old woman, she works as a Sister of Mercy among the poor. While tending the dying during an epidemic, she finds Gabriel among the sick, and he sadly dies in her arms. The final verse of Michel Conte’s lyrics says, “Your name is more than Acadia…it stands for all those who, despite unhappiness, still believe in hope and love.”

This early 16th Century carol in Dorian mode is believed to be a New Year’s song as it includes not only the Nativity, but also a the visit from the Magi, which is associated with Epiphany on January 6. The most complete text that we have dates from the Bible des Noëls anciens, 1791, which has all 13 verses.  This score includes both the original French and an alternate English version.

SSA with piano  –  CP 1891
Erica has given an authentic treatment to the Gordon Lightfoot hit. We all need such people in our lives.
Rainy day people always seem to know when it’s time to call
Rainy day people don’t talk – they just listen till they’ve heard it all

SAB a cappella with recorder & percussion  –  CP 1123
This well loved ancient Christmas melody really sparkles with Erica’s setting. Up tempo and easy to learn, your choir and audience will love it.

parts for recorder, triangle and djembé are available (no charge) upon request.

This is an SA arrangement of an old Flemish tune with the French text first appearing in the Recueil de noëls angevins (1874). Listen for the hint of Beethoven’s Pastoral Symphony and a lot of open fifth bagpipe bourdons embedded in the accompaniment that give it a pastoral feel. This arrangement is part of Dr. Laurier Fagnan’s series entitled La série enchantée.

SATB with piano  –  CP 1484
optional violin and accordion parts are available upon request – no charge
Mary Travers (known as “La Bolduc”) wrote mainly political and satirical songs, but also a number of New Year’s songs. However, this song is actually a Christmas song in which children are being admonished to go to bed early to ensure that when Santa arrives with his reindeer and gifts, he will be in a good mood. This arrangement is part of Dr. Laurier Fagnan’s series entitled La série enchantée.

SATB with piano and instruments  –  CP 1961   – duration 4:05
SSAA with piano and instruments  –  CP 1975
TBB – available upon request
This is one of Robbie Smith’s most beautiful songs – in a minor key – and Erica has given it a stunning choral arrangement with sweet-spot vocal registers and interesting lines for each singer. The ideal instrumental accompaniment should include violin and recorder. However, this song would work well with almost any combination of C instruments. We also have a solo option for flute, violin, oboe or recorder.