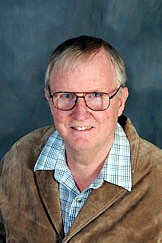 For nearly forty years, Dave Baker (b. 1945) has been writing and singing songs about the west coast of Canada. Raised in Nanaimo and Duncan on Vancouver Island, Dave is eminently qualified to write about the lifestyle, and the many historical personalities and icons that have contributed to the development of the area. Dave is also a railway enthusiast. Over his lengthy career in music, Dave has produced three vinyl LPs and four CDs  Many tracks from these recordings have received radio airplay both nationally and internationally. His songs have appeared several times on national Canadian country music charts as well as featured on play-lists in the US, Europe, Australia and New Zealand. Since Dave’s songs were arranged for choirs by noted Vancouver composer/arranger Dr. Larry Nickel, choirs across Canada have included Dave’s work in their repertoire.
Learn more about Dave Baker here.

TTBB with piano  –  available upon request
Dave used to live close to the Fields of Alderlea, on Vancouver Island.

A person residing on the east coast longs to return to his west coast home and he is ready to say “I’m sorry”. This beautiful song has rich harmonies. High School and Community Choirs will love it.
also available: TTBB with piano – upon request

TTBB with piano available upon request
Chief Maquinna served his people in the Pacific Northwest. He was an effective leader in dealing with the first European settlers.  Dave’s music and lyrics capture a distant time and place – a legend “carved upon the sand”.  watch the youtube video here
also available: TTBB with piano – upon request
LOOK & LISTEN

TTBB with piano  –   CP 1819
In Stan Rogers’ “Make and Break Harbor” we regret the passing of the cod from eastern oceans. Now in Baker’s Old Lady Rose we bemoan the same phenomenon happening to the salmon on the west coast. Baker’s sea shanty of regret begins and ends with a melancholy farewell. Nickel adds sensuous harmonies.  watch the Youtube video here
also available: TTBB with piano – upon request
LOOK & LISTEN

TTBB with piano  –   CP 1336
SSA with piano  –   CP 1347
SAB with piano  –   CP 1516
Listen to the Chor Leoni performance. This song is a real cooker. Get on board and ride along British Columbia’s famous coastline – just in time for the 2010 Winter Olympics. Baker’s railroad rhythm captures the excitement of one of BC’s landmarks – famous engine #2850 – the Royal Hudson. watch the Youtube video here
LOOK & LISTEN

Dave is such a railway buff! He has many childhood memories watching steam-engines roaring by. Ride the rails with his folk-song.

This Land Is What I Am

SSAA with piano  –   CP 1441
TTBB with piano  $2.535   CP 1337
Another great Canadian Folk Song from this winning combination of BC musicians. Dave Baker brings his down-home charm and Larry Nickel his singable harmony and catchy piano accompaniment, adding this BC folksong to a great Canadian tradition. watch the Youtube video here

Sail upon the waves with this lovely lilting melody.

SSAA with piano  –  CP 1763
An arrangement of David Baker’s “tribute to Emily Carr”. With a very tender text, this ‘Railroading Man’ fashions a striking portrait of B.C.’s best known painter. As usual, Larry Nickel is up to the task of arranging a lovely choir version of this remarkable piece. watch the Youtube video here