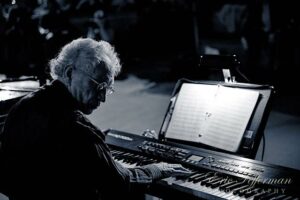 Multi instrumentalist, and indefatigable, Tom Leighton brings sophisticated colours and novel arrangements to his music that few musicians can match. He plays piano, accordion, accordion bass, bouzouki, bodhran, whistles, jaw harps, mandolin and trombone— sometimes three of them at the same time!   As a solo recording artist, Tom’s “Leighton Tendencies”, and  “Leighton Life”,  are projects starring his own compositions and arrangements and “…. feature the writing skills and musical dexterity of this wonderful musician.” Whole Note Magazine. His instrumental recording – “Better Leighton Than Never” was released in May 2021.He has written numerous chorale arrangements for school, community and professional choirs, many of which are based on the work of contemporary Canadian folk artists. Tom has also been a co-composer with Suzanne Pasternak for musicals including “Ship of Fire”, and “Minerva” which have been mounted by the Festival Players, Prince Edward County. Tom was a long time member of the music theatre team at Wexford School for the Arts, Toronto. He has performed with several partners including Mary Kelly, Conrad Kipping, Ian Bell, Anne Lederman and Marie Lynn Hammond.​

When the Carols Began

by Robbie Smith and Mike Appelboom
arranged by Tom Leighton

With a gentle triple-time lilt, this beauty addresses the Nativity theme in a surprising and delightful way.
Take the words make the words fill the hearts of men
Though words are mere shadows of what happened then
When heaven’s great treasure descended to man
That time-honoured night when the carols began