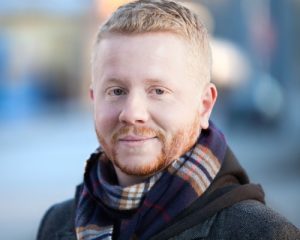 Originally from South Africa, Steven Webb (b.1989) is a Toronto based performer, composer, and audio engineer.
Steven has written music for a wide variety of ensembles, and his repertoire includes choral, chamber, and orchestral music. His compositions and arrangements have been performed by: The Winnipeg Symphony Orchestra, The Toronto Symphony Orchestra, Thin Edge New Music Collective, The University of Guelph Symphonic Choir, Exultate Chamber Singers, and Prairie Voices, among many others.
As a film composer, Steven has worked on a number of noteworthy projects including ‘Chopin’s Heart’ for The National Screen Institute, and ‘Period Piece’, winner of the best Canadian Short Film at the Toronto After Dark Film Festival. Steven is a member of SOCAN, an Associate Composer at the Canadian Music Centre, and a member of the Screen Composers Guild of Canada.

Created using nonsense syllables, Li Ngu Weko is an exciting and upbeat piece that should be sung with energy and a strong sense of groove or rhythm.
Inspired by my upbringing in South Africa, the piece incorporates elements of Southern African choral music, as well as the western classical choral repertoire. Conductors are encouraged to incorporate basic movement or choreography to enhance the piece, and choir members are highly encouraged to move their bodies to the music!