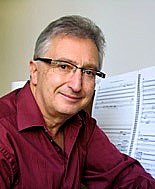 Sid Robinovitch: Encompassing a wide variety of musical styles and forms, Robinovitch’s works have been performed throughout North America and abroad, having been featured by groups such as the Elmer Iseler Singers, the Vancouver Chamber Choir, the Amadeus Choir, and the Louisville, Toronto, and Montreal Symphony Orchestras. In addition to his concert works, Robinovitch has written music for film, radio and TV, where he is probably best known for his theme for the CBC-TV satirical comedy series, “The Newsroom.”  He has received  6 Juno and Western Canadian Music Award nominations and won a Prairie Music Award for outstanding classical composition of the year for his Suite for Klezmer Band and Orchestra recorded by the Winnipeg Symphony Orchestra under the direction of Bramwell Tovey.

SATB a cappella  –  CP 1826    – duration 8:45
The complete set:  1) The Coming of Teddy Bears  2) The Wizard  3) Deeper
These compositions are also available individually (listen below)
Dennis Lee began writing for children as part of his goal of “Reclaiming language and liberating imagination”; his poems are about the language and activities of the daily lives of children, expanded into the realm of imaginary play and fantasy.

The Coming of Teddy Bears

SATB a cappella    –  – CP 1724    – 2:15
Dennis Lee’s bedtime poem is given a scrumptious setting with long lines, intuitive voice leading, sweet-spot vocal registers and sensual harmonies.  Approachable for most SATB choirs, this piece would make a touching conclusion to any program.

SATB a cappella    –  CP 1747    –  duration 3:00
It seems that Dennis Lee was deep in thought when he wrote this poignant poem and Sid must have been in a similar mood to give it such a lovely setting.

The Lord is My Shepherd - Psalm 23

SATB with keyboard or a cappella –  – CP 1281   – 4:20
(other vocal settings – for men’s choir and women’s choir – are in progress – see below)
Psalm 23 was commissioned by the Royal Canadian College of Organists and first presented at the 2004 Winnipeg Organ Festival.  It exists in several different forms, allowing wide flexibility in performance.  The vocal harmonies are complete unto themselves so that it can be performed a cappella or with organ or piano accompaniment. There are versions in English for SATB, SA, and TB choirs and also a version for SATB using the original Hebrew text.  Here is what the Winnipeg Free Press reviewer said about the premiere:

“A true highlight of the program has to be Manitoba composer Sid Robinovitch’s Psalm 23 – The Lord is My Shepherd, one of the commissioned works. Just when you think you’ve heard every possible version of this most famous psalm, Robinovitch comes along with this charming and very listenable rendering. It had drama, varying colors and moods and was simply lovely. The tenors and basses sang it through the first time, showing good balance. The women joined them for the repeat and with the organ (which has as important a role as the singers in this piece), presented a stirring new hymn that deserves to become a tradition.” (Gwenda Nemerofsky, July 20, 2004)