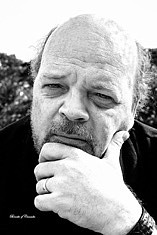 Canadian Peter-Anthony Togni (b. 1959) is an award winning composer, pianist, organist, conductor and former CBC broadcaster. He has been heard everywhere from Toronto’s Roy Thompson Hall, the Moscow Conservatory, the Oriental Arts Centre in Shanghai, to the Vatican in Rome for His Holiness St. Pope John Paul II. Peter’s music is broadcast regularly around the world and he has made several recordings, three of which were nominated for a Juno award. Togni’s “Responsio” for vocal quartet and bass clarinet was the winner of the 2014 Lieutenant Governor of Nova Scotia Masterworks Arts Award. In 2016 Peter’s opera “Isis and Osiris” premiered to critical acclaim in Toronto. Peter is also one half of the duo called Blackwood with bass clarinetist and long time collaborator Jeff Reilly. Togni teaches composition at Acadia University in Wolfville and is the organist – choir master of the Principle Choir at St Benedict Parish in Halifax. He is also a member of the choir at St Vladimir’s Orthodox Church in Halifax. He makes his home in Dartmouth Nova Scotia with his wife Patricia and son Victor.

The second movement of SEA DREAMS, Alma Redemptoris, is a Catholic hymn from the 11th century and is thought to have been authored by Hermannus Contractus. This hymn was mentioned in the Prioress’s Tale, one of Geoffrey Chaucer’s Canterbury Tales. It is usually sung in Latin, Sweet Mother of the Redeemer, the passage to the heavens, the gate of the spirits of the dead, and the star of the sea, aid the falling. I was inspired by Giovanni Pierluigi da Palestrina’s beautiful setting of it, a motet I have sung or conducted many times throughout my life and have incorporated the spirit of this 16th century masterpiece in this movement. Listen to the amazing recording by Luminous Voices – nominated for a Juno Award.
LOOK & LISTEN

SATB a cappella – CP 1663  – duration 6:30
Peter captures the spirit of the lovely poem by Carman Bliss.
Then Earth to them made answer,
As with a slow refrain
Born of the blended voices
Of wind and sun and rain,
“This is the law of being
That links the threefold chain:
The life we give to beauty
Returns to us again.”

The Final Word is Love

SATB a cappella – CP 1364   – duration 2:00
I’m deeply moved by the American journalist, social activist and Catholic convert, Dorothy Day. In 1933 she along with Peter Maurin founded the Catholic Worker Movement. To this day it provides aid for the poor and homeless and those living in the margins of society. In her writings she points to what she calls the “long loneliness and how the only solution is love and that love comes with community” This composition is my direct and indeed simple sonic response to her life. As she said,”We cannot love God unless we love each other, and to love we must know each other”

SATB a cappella – CP 1365   – duration 3:25
Da Pacem Domine is part of a work I wrote in 2014 called Warrior Songs, a work about the concept of non- aggression, of a true Warrior, one who never actually goes into battle. I drew inspiration from Tibetan Buddhist texts, from Malcolm X and from the from my own Roman Catholic tradition. My motet Da Pacem Domineis based on a one of the most beautiful Gregorian Chant melodies. Even though the text is peaceful and hopeful, it still calls for surrender to God’s will. The chant sounds rather serious, even somber, but again points to the fact that peace does not mean tranquility, it is often a steady walk in the face of adversity.

SAB with piano – KH 086   – duration 2:35
Lord make me an instrument of your peace,
Where there is hatred let me sow love.
Where there is injury, pardon.
Togni’s rendition of the famous prayer is in three part harmony and sweet-pot vocal registers. The lovely melody and flowing accompaniment provide the perfect marriage for the text.