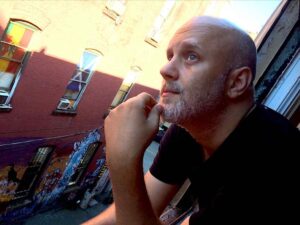 Jordan Nobles (born December 11, 1969) is a Canadian composer who specializes in creating spatial music and open instrumentation compositions. His music is performed worldwide and has won several international and national awards including the 2017 Juno Award for Classical Composition of the Year.
Nobles is a founding artistic director of Vancouver’s Redshift Music Society, an organization founded in 2001 which commissions and premieres new works by Canadian and international composers, and of Redshift Records, the recording division of Redshift Music, which released its first CD in 2007 and now has approximately 40 releases, focussing on contemporary music.
In addition to winning the 2017 Juno for Classical Composition of the Year, Nobles won the SOCAN Jan V. Matejcek New Classical Music Award in 2017, the 2017 Western Canadian Music Award for Classical Composition of the Year, and the 2017 Barbara Pentland Award of Excellence from the Canadian Music Centre.

The æther (also spelled aether or ether) was once believed to be the material that fills the region of the universe above the terrestrial sphere, where the stars reside. Instead of the vacuum we know is there today previously it was imagined that a vaporous element surrounded the Earth, filled the heavens and was the very breath of the Gods.
* The Lorelei Ensemble of Cambridge, Massachusetts chose æther as the winner of their International Call for Scores (October 2012)

Another trademark “spacialized” marvel from the pen of Jordan Nobles. If possible, the singers should be arranged spatially, in a circle around the audience with each singer in the location of each hour of a clock The music will then spin around the audience.
* Coriolis has been released on CD by the Kammerchor Consono, conducted by Harald Jers Spotify

I have always found voices singing words in a language I do not understand to be haunting and beautiful. Perhaps because I am paying more attention to the sound of the voice itself and not trying to follow the meaning of the poetry. When I compose for voice I usually use only vowels sounds or vocalize but recently have found that limiting. So I went off in search of a text with all of the timbral richness of speech but without an overt meaning. And then I found, in my computer already, the Lorem Ipsum text.

The Lorem Ipsum text is a commonly used series of fragmented Latin words that has been used, possibly since the sixteenth century, to provide a ‘filler text’ during typesetting. Where text is visible in a document, people tend to focus on the textual content rather than upon overall presentation. Because it is ‘nonsense text’ publishers use lorem ipsum when displaying a typeface or design elements and page layout in order to direct the focus to the publication style and not the text itself.

Lux Antiqua is written for the singers to be spatially spread about the performance space, preferably surrounding the audience. Balconies, lofts, etc. can also be utilized as well. The exact layout will vary depending on the venue and is not important as long as they are evenly distributed throughout the space. Also, if possible, the sections (soprano, alto, tenor, bass) should not stand together as would be the norm but instead should be separated so each soprano, etc. is in a different area of the space from the others.
Alternate Option: A performance can start with the singers together on stage and immediately once the piece has begun they can slowly spread throughout the venue. Or alternatively they can come physically together by the end.
* Lux Antiqua has won the International SACRA/PROFANA Composition Competition 2013
* Lux Antiqua has been chosen for performance at the International Society for Contemporary Music’s World Music Days in Wrocław, Poland in October 2014.
* Lux Antiqua was the work commissioned from Jordan after he was named the International Winner of the Polyphonos Composition Competition (Seattle 2011).

The inspiration behind Still Life is a desire to capture a single moment stretched over time. A frozen snapshot of life that doesn’t decay or fade. Still Life has no rhythmic motifs and no discernible melodies. It is a monolithic structure without overt movement, like a cloud, a sunset, or the tide. But on closer inspection, inside the stillness itself, there is always motion.
* Still Life was performed by over 600 singers at the Mass Participatory Musicking Festival in Hong Kong in July 2011
* Still Life was chosen to represent Canada at the ISCM’s 2009 World Music Days in Sweden
* Still Life was awarded first prize in the Vancouver Bach Choir’s National Choir Music Competition (Vancouver 2008)

It was a huge success…The audience was in a trance and we got a standing ovation in the middle of the concert!   Michael Zaugg, conductor Choeur Saint-Laurent,  Montréal, QC
The jury thought collectively that it was an extremely well crafted piece. Perfect for a large choir. A really convincing concept, a simple concept but a convincing one. The counterpoint and harmonic progressions were really beautiful and well worked out.  Stephen Chatman, Adjudicator, West Vancouver, BC