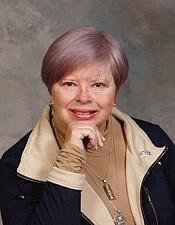 Joanna Estelle (Storoschuk) (b. 1950) is a Canadian composer, lyricist, and arranger whose music has been performed from Parliament Hill, Ottawa to London (UK), Barcelona (Spain), and elsewhere around the world. She graduated summa cum laude on the Dean’s list as the University of Ottawa’s Faculty of Arts silver medalist (2009). Joanna then completed the MA Music Programme at York University, Toronto (2009-2011) and became a Melodious Accord Fellow of the American choral composer Alice Parker. Since 2016, she has been a doctoral candidate in composition through the University of Sheffield (UK).  Joanna served on the board of the Association of Canadian Women Composers (ACWC) for many years and was a founding member of the Ottawa New Music Creators (2008). Her CD “Emergence” released by PARMA Recordings (Boston) in May 2018 features Child of the Manger and Water Canticle which are both available from Cypress Choral Music.   For further information, see: www.joannaestelle.com

SATB a cappella – CP 1696   – duration 3:00
Originally premiered at Canada’s National Arts Centre (Ottawa) on Canada Day 2009 by the UNISONG Festival Massed Choir, this piece was inspired by the old merry-go-round in the Montmartre district of Paris.

Child of the Manger

The Ottawa Citizen newspaper had this to say about Joanna’s piece; “ This contemplative and exquisitely beautiful piece should be a regular part of the Christmas choral repertoire.”

I Am My Home

My late grandfather Michael Sharik was a Ukrainian poet, author, and political activist who fought the Bolsheviks 100 years ago, then fled to Canada as a refugee in the 1920s.  He spent his entire life working for a Ukraine free of Russian domination. In 2002, I wrote this piece for choir and dedicated it to his memory. I borrowed the first verse from “Our Great Home”, a poem that he wrote in 1952 to commemorate Queen Elizabeth II’s accession to the throne.  The rest of the text describes my personal spiritual journey looking for my own life as a child of refugees.  Given the current situation in Ukraine, I am rededicating my piece to all those who have been displaced by war there and around the world.

Cantata Singers of Ottawa commissioned Water Canticle for a 2000 fundraising concert on behalf of WaterCan, a non-profit organization dedicated to helping poor communities in developing countries build sustainable water supply and sanitation services.  Margaret Trudeau, mother of Canada’s 23rd Prime Minister, is the long serving honorary president of WaterCan.  This piece was dedicated to her because the text was based on comments she made during an interview regarding the healing nature of water in her own life.