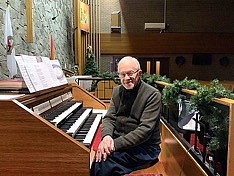 Henry Boon was born in a small town in a northern province of The Netherlands. At a young age he attended organ recitals in a local church, which happened to house an organ build by the famous German organ builder, Arp Schnitger.

After immigrating to Canada, Henry studied piano and organ, the latter with David Ourchterlony at Timothy Eaton Memorial in Toronto. After moving to Windsor he continued organ studies with Gordon Young in Detroit, Michigan, while studying harmony and counterpoint at the Detroit Institute of Musical Arts with Albert Filmore. In 1973, Henry graduated from the University of Windsor with a Bachelor of Music and a year later with a Bachelor of Education. Henry taught instrumental and vocal music at Assumption High School for 25 years.

In 2009, Henry came in first out of 67 submissions in the “Great Canadian Hymn Writing Competition,” sponsored by the Pax Christi Chorale in Toronto, with a composition entitled: “I Heard that God was Power.” In 2014 and 2015, Henry won awards with two seasonal compositions: “The Wondrous Story,” and “Do Not Be Afraid,” sponsored by the Amadeus choir of Toronto, under direction of Dr. Lydia Adams. Henry’s wife, Susan, wrote the lyrics for each composition. Henry Boon is currently music director at Tecumseh United Church. His favorite pastimes are walking on the Green Way, traveling, reading, visiting with friends and, of course, composing.

Do Not Be Afraid

Imagine being visited by the glorious Angel, Gabriel – The Annunciation is the beginning of the Christmas story. Henry’s compositions have a timeless quality. He treats the story with genuine tenderness. Give a listen.  Choirs of all levels of ability will love this song.

“I am a baritone with the Amadeus Choir and I am writing to express my thanks to you both for your most wonderful Christmas gift, your composition “Do Not Be Afraid.” When Lydia first rehearsed the work with us, I found myself almost overwhelmed by both the text and the achingly beautiful music. Among all the new works, to me at least, “Do Not Be Afraid” is in a class of its own. You have captured not only the true spirit of Christmas, but also a key message for us during these most troubling times – a message of hope.” –  Jamie McGill.