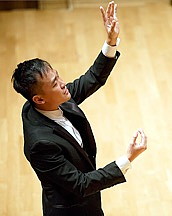 Darius Lim (b.1986) Singaporean Composer-Conductor Darius Lim is the Founder and Artistic Director of the Voices of Singapore. He has risen to prominence in the choral music scene with more than 40 national and international awards in choral and composition competitions. An internationally published composer and established conductor, he is most known for his unique infusion of lyrical, dramatic, instrumental and theatrical elements in both the choirs he directs as well as the choral music he has written. Among the numerous recognitions  and accolades garnered by his choirs under the Voices of Singapore Choral Society, the Singapore Virtual Choir received international acclaim when their rendition of “Home” by Dick Lee went viral and is now used for international level events and set a benchmark for virtual choirs in Singapore.

Darius has adjudicated choral competitions, given lectures on choral conducting as well as conducted choral masterclasses in Asia, America and Europe. He has held former posts as President of the Choral Directors’ Association of Singapore, Associate Choirmaster of the Singapore Symphony Children’s Choir, Music Director of the Singapore Eurasian Association Choir and Music Director of the National University of Singapore Society Choir.

A former student of BBC Chorus Director Neil Ferris and Dr Sarah Tenant-Flowers, Darius Lim graduated from the Royal Welsh College of Music and Drama (UK) with a Masters in Choral Conducting (with Distinction). He currently wears multiple hats in the music industry including Deputy General-Secretary of National Instructors & Coaches Association as well as being the nominated Singapore representative on the board of the Asia Pacific Choral Council

Call of the Angels

Lady of the Evening Star