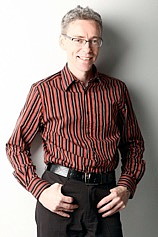 Born in Quebec (1964), in the Lanaudiere region, Mr. Bruno Dufresne graduated the Conservatory of music of Trois-Rivieres and Quebec city where he studied the French horn, chamber music and the conducting. Subsequently he studied the methodology of music teaching, classical singing and computer science at the Universite du Quebec à Trois-Rivieres. Pursuing a double career as an educator and performer, he was member of the Trois-Rivieres Symphony Orchestra and played the French horn as a freelancer in different
regional orchestras. It was while directing the Girls’ choir of Maîtrise de Cap-de-la-Madeleine that he developed his passion for choral singing.

Mr. Dufresne also conducted the Joseph-François Perrault vocal group which shortly became one of the best teenager choirs in Canada. With this choir, he obtained several prizes, among which the second prize at Radio Canada’s prestigious National Competition for Canadian Amateur Choirs in 2000 and 2002. As visiting professor, he equally conducted the Université de Montréal choir between 2000 and 2002. Bruno Dufresne has been the choir director of Les Voix de la montagne since 2002 and has recently become the musical director of the vocal group Extravaganza.

SATB with piano  –   CP 1410   – 5:10
A bird, a tree, a child – with questions of happiness and loneliness. What a provoking trilogy to deal with the deep questions of our existence in such a charming way.