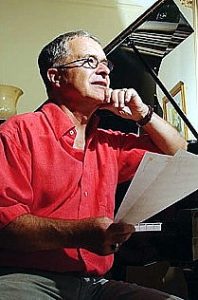 BRIAN ‘HOOT’ GIBSON  earned a degree in music at the University of British Columbia and then set out on a career of working in the recording studio – writing music for film and television commercials.  “I figure my partners and I wrote over 3,000 jingles over 25 years.” One of his most memorable tunes is the “badum badum” theme for the A&W restaurant brand – together with Miles Ramsey who is also a Cypress composer. But by the late eighties, leading advertisers were ditching the jingle for more conceptual, instrumental music. Mr. Gibson’s revenue stream dried up. Now he still spends about one-third of his time writing music for ads, but balances it out writing songs for films and cartoons. Hoot is hoping to do more work on jingles, as they become popular again.

Lost in this Present Paradise

This composition is perfect for high school and community choirs. Many church choirs will love it too. With a lovely melody Brian found a musical marriage for his touching lyrics: