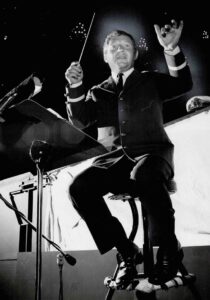 Berthold Carrière composed and arranged music for over 80 Stratford Festival productions, among the earliest of which were incidental scores for The Comedy of Errors (1975); Hamlet (1976); and The Tempest (1976). In the 1980s the Festival returned to the production of musical theatre, and Carrière’s responsibilities expanded. He began auditioning singers, reviewing music projects, and working with choreographers such as Brian Macdonald, Michael Lichtefeld, and Donna Feore. He conducted, among others, H.M.S. Pinafore (1981); The Gondoliers (1983); The Mikado(1983); and Iolanthe (1988). The first two were released on video, while the third was aired on A&E in the US in 1986. These works were substantially re-orchestrated by Carrière, drawing criticism from Gilbert and Sullivan purists who felt his changes diminished the scores. Nonetheless, Carrière led The Mikado on tour to Broadway and The Old Vic in 1987, while his re-orchestrated version of The Gondoliers was performed in Sydney, Australia in 1989.

In 1998, Berthold Carrière took productions of Much Ado About Nothing and The Miser to the New York City Centre. He wrote music for The Tempest and Twelfth Nightfor CBC Radio in 1999, and King Lear in 2004, the latter being presented by the Lincoln Centre on Broadway. He also conducted The Sound of Music (2001); Hello Dolly (2006); Oliver (2006); and Oklahoma! (2007). In 2002 his music was featured at the Stratford Festival in performances by Canadian Brass, the St. Mary’s Children’s Choir, and the Festival Youth Singers. He was also commissioned by the Festival to write Music for a Midsummer’s Night (2003), which has become an annual event, played on the opening night of the Festival. Despite resigning as Festival music director in 2007, Carrière has maintained close ties with Stratford, returning to conduct The Music Man in 2008 to great acclamation.

Berthold Carrière was named a member of the Order of Canada, and he was given the Queen’s Golden Jubilee Medal in 2003.

Oh sweet butterfly in the sky, how does it feel to fly so high?
If only I had wings like you, I’d be up there with you too.

SSAA (often in 2 part) with piano (optional instruments) – KH 069 – duration 2:35
Anika grew up in Stratford, a member of St. Marys Children’s Choir, and she was about 13 when she wrote the poem for a competition open to children. The prize for the winning poems was to have them set by Bert. Anika is now an accomplished performing artist in Toronto, well-known as a dancer, choreographer, dramaturge, and co-writer of musicals, with her sister, Britta.