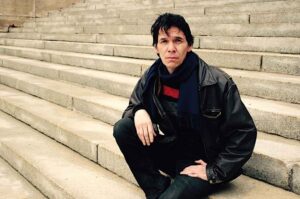 Prominent Winnipeg composer Andrew Balfour, of Cree descent, has written a body of choral, instrumental and orchestral works, including Take the Indian, Empire Étrange: The Death of Louis Riel, Migiis: A Whiteshell Soundscape, Bawajigaywin, Gregorio’s Nightmare, Wa Wa Tey Wak (Northern Lights), Fantasia on a Poem by Rumi, Missa Brevis and Medieval Inuit. He has been commissioned by the Winnipeg, Regina and Toronto Symphony Orchestras, Ensemble Caprice, the Winnipeg Singers, the Kingston Chamber Choir and Camerata Nova, among others.  His works have been performed and broadcasted locally, nationally, and internationally. Andrew is the Artistic Director of Winnipeg’s Camerata Nova known for their inter-genre and interdisciplinary collaborations. He is passionate about music education and outreach, particularly in schools located in low-income areas of Winnipeg and in northern communities.

SSATB a cappella – CP 1571   – duration 2:30
Choirs will love the rhythmic drive and energy of this meaningful composition.
The Ojibway text means “Come in, two-legged beings. Come in all people. There is good life here.”

This piece is based on an original song in Ojibway that was gifted by traditional drummer and singer Cory Campbell to Andrew Balfour and the University of Manitoba Concert Choir. Cory describes the song as “a call to the people to the ceremonial way of life or to the red road or, quite frankly, to whatever we have going on, because everything happens with spirit and in spirit.”
Andrew has created an original composition inspired by Cory’s song which uses the same text and echoes the steady rhythm of the drum, unifying the piece. The melodies of Andrew’s piece are all original but hints of Cory’s song remain. For Andrew, the steady beat throughout represents the heartbeat of Mother Earth and the lyrical first soprano melody that emerges from this rhythmic texture at measure seven conveys the powerful totem of the eagle which represents the teaching of love, wisdom, and strength.
The accompanying recording of Cory singing his original song is provided for conductors to hear the pronunciation of the text and to share with choristers the inspiration behind the composition. It is not meant to be reproduced by choirs or other singers without Cory’s permission unless it is being used in a ceremonial manner.
Many dialects and local writing systems for Ojibway exist. The pronunciation for the text is based on the dialect spoken on Sagkeeng First Nation in Cory’s home province of Manitoba. Specifically, the pronunciation of the word Anishinaabeg [a’nis:iʌnɑ:bek~g] or phonetically,  a-nis-ee-uh-nah-bek/g, reflects one of the teachings that have come to Cory involving the etymology of the word in representing not only the Ojibway people, but people of all nations, or two-legged beings.

k, p, t are light and unaspirated; somewhere between voiced and unvoiced

Idiomatic translation:
Come in two-legged beings
come in all people
The way of a good life is here
Come in!

This commission was made possible through a Creative Works Grant from the University of Manitoba. Andrew, Cory, and Catherine met throughout the compositional process to discuss the cultural context of the piece, the form of the original song, the meaning of the text, and the needs of the choir, and to learn from one another. Cory was offered ceremonial tobacco for his gift of the song. Thank you also to Patricia Ningewance and Diane Morrisseau for help with pronunciation, translation, and representation of the language. This composition stands as an example of respectful and meaningful dialogue between Indigenous artists and culture bearers, and composers, conductors, and choirs.

SATB with piano, organ, or strings – CP 2069   – duration 5:55
String parts are available with two options:
a) violas, cello and double bass
b) string quintet (2 violins, viola, cello and double bass)
“Mamachimowin (The act of singing praises) is a choral work that explores the difficult relationship between Indigenous spirituality and the impact of the Christian culture on First Nations people.  Translating Psalm 67 into Cree, I wanted to add a musical perspective that added a dimension of fragmentation into the structure of the work.  Also I wanted to utilize the instrumentation of violas, cellos and double basses to give the idea of the strings representing a foundation of the ground, or Mother Earth.  I wanted to present the idea of musical tension and musical phrases along with the choir whispering some of the text to add an element of uncertainty.  (Andrew Balfour)

Inspired by travels in Baffin Island in 2009 and a collaboration with Iqaluit folksinger and songwriter Madeleine Allakariallak, Qilak was composed as part of a concert project for Winnipeg-based Camerata Nova entitled Medieval Inuit: Stories of the North. The theme of the concert explored the early contact between Scandinavian explorers and the Inuit 1000 years ago. Balfour tells us: “Qilak is about the northern sky which is so breathtaking up in the Arctic. I loved the open space, the Inuit’s relationship with the land, and the musical sound of Inuktitut.”

The aesthetic of the piece reflects the expanse of sky and the shimmering reflection of sun on snow. Balfour’s composition hints at influences of Inuit throat singing and hauntingly echoes the vocables of traditional Ayaya songs of Southern Baffin Island. A heartfelt thank you, Elder Fred Ford, for your teachings on the Inuktitut language, and to Piita Irniq for your teachings about Ayaya songs.

Vision Chant incorporates the Ojibway word, “babamadizwin”, which means “journey”.
This is an excerpt from a larger work, Bawajigaywin, commissioned by the Kingston Chamber Choir.
Listen to the convincing rendition by the Canadian Chamber Choir (director – Dr. Julia Davids)
Based on an Indigenous chant style, this work is striking for both its stillness and its intensity.  The journey that is evoked begins
and ends with a soprano melody, at first divided and then, symbolically perhaps, unified. What takes place in between these musical bookends is the vision itself.