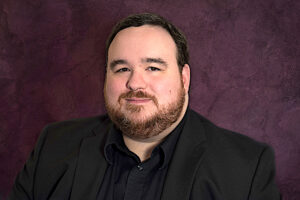 Zachary Windus is a composer specializing in choral and vocal music, as well as an organist, choral conductor, and professional countertenor. He earned a Master of Vocal Performance degree from the University of Ottawa under countertenor Daniel Taylor and bass-baritone Ingemar Korjus, and subsequently studied with Nancy Argenta at the Victoria Conservatory of Music. Zachary has performed with numerous renowned ensembles including the JUNO award-winning Ottawa Bach Choir, the Men and Boys Choir of Ottawa’s Christ Church Cathedral, the JSBEnsemble of the Bachakademie Stuttgart, and the inaugural Weimar Bach Cantata Academy Ensemble. He has also served as Organist and Director of Music at numerous churches in the dioceses of Hamilton, Niagara, and Victoria.

Zachary’s compositions have been performed across Canada as well as in the United Kingdom and Europe. They have won national and international competitions, been included on multiple recordings, and broadcast on Radio-Canada. Zachary has received commissions from the Grand River Chorus, the Vox Humana Chamber Choir, and the Choir of Christ’s Church Cathedral in Victoria. He was selected as the winning composer of the Toronto Mendelssohn Choir’s 2019 Debbie Fleming Prize for Choral Composition for his new Christmas Carol “In Bethlehem Upon That Morn.”

In Bethlehem Upon That Morn

The fifth annual Toronto Mendelssohn Choir’s Choral Composition Competition asked composers to submit a sacred or secular a cappella work for the Christmas season. The 2019 winner was this spirited setting of the text of The Wexford Carol by Zachary Windus. The lyrics of this traditional Irish carol speak of the events immediately surrounding the birth of Jesus, while urging us to remember with joy the wondrous gift that God has given to the world.