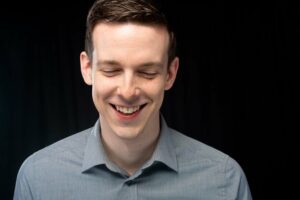 Zachary Wadsworth is an American-Canadian composer of “fresh, deeply felt and strikingly original” music (Washington Post). Praised for their “evocative mixture of old and new,” his works have been heard in venues around the world, from the Kennedy Center in Washington to Takinogawa Hall in Tokyo. After winning an international competition chaired by James MacMillan, Wadsworth’s Out of the South Cometh the Whirlwind was performed by the choir of Westminster Abbey in the presence of Queen Elizabeth II, Prince Charles, and the Archbishop of Canterbury. For the 2012-13 season, Wadsworth was a Fellow of the Douglas Moore Fellowship for American Opera, which placed him in residence at the Metropolitan Opera and the Santa Fe Opera. In 2014, he had his Carnegie Hall debut.

Since its composition in 2004, Wadsworth’s opera, Venus and Adonis, has already been staged five times and hailed as an “astonishingly confident” and “mesmerizing” work. His vocal music has been widely programmed by leading performing groups around the world, including the Washington National Opera Chorus, the Yale Schola Cantorum, Boston Metro Opera, Long Leaf Opera, the Tokyo Cantat, and the Richmond Symphony Chorus. Wadsworth’s “subtly beautiful” orchestral works have been performed by the Buffalo Philharmonic Orchestra, the Atlanta Philharmonic Orchestra, the Yale Philharmonia, and the Wind Ensemble and Festival Chamber Orchestra at Cornell University.

Originally from Richmond, Virginia, Wadsworth (b. 1983) earned graduate degrees from Cornell University (DMA) and Yale University (MM), and is an honours graduate of the Eastman School of Music (BM). His principal composition teachers have included Steven Stucky, Martin Bresnick, Ingram Marshall, Ezra Laderman, and David Liptak. He has taught at the Interlochen Center for the Arts and the University of Calgary, and he is currently an Assistant Professor of Music at Williams College. He also maintains an active performing life as a tenor and pianist.

This winter song, commissioned and premiered by Chor Leoni in Vancouver, uses poetry by Henry Wadsworth Longfellow to explore the beauty and emotional resonance of falling snow. An alto saxophone adds richness to the choral lines, and the piano creates icy, sparkling effects that pair beautifully with the text.

Out of the bosom of the Air,
Out of the cloud-folds of her garments shaken,
Over the woodlands brown and bare,
Over the harvest-fields forsaken,
Silent, and soft, and slow
Descends the snow.

Even as our cloudy fancies take
Suddenly shape in some divine expression,
Even as the troubled heart doth make
In the white countenance confession,
The troubled sky reveals
The grief it feels.

This is the poem of the air,
Slowly in silent syllables recorded;
This is the secret of despair,
Long in its cloudy bosom hoarded,
Now whispered and revealed
To wood and field.