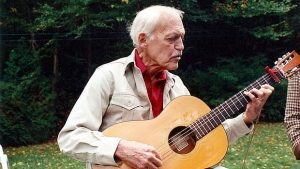 Albert Wade Hemsworth (23 October 1916 – January 19, 2002) was a Canadian songwriter. Although he was not a prolific composer, having written only about 20 songs during his entire career, several of his songs (most notably “The Wild Goose”, “The Black Fly Song” and “The Log Driver’s Waltz”) are among the most enduring classics in the history of Canadian folk music. Hemsworth grew up in Brantford, Ontario, and learned to play guitar and banjo in his youth. He subsequently studied painting at the Ontario College of Art, graduating in 1939, and then spent World War II serving in the Royal Canadian Air Force. He was stationed for a time in Newfoundland, and it was there that he first discovered traditional music.
After the war, he worked as a surveyor in the wilderness areas of Northern Ontario, Quebec and Labrador, the job which provided Hemsworth with the subject matter for many of his songs. He subsequently moved to Montreal in 1952, where he worked as a draftsman for the Canadian National Railway, and performed in the city’s folk music clubs at night. He recorded his first album, Folk Songs of the Canadian North Woods, in 1956. That album included both original compositions by Hemsworth and traditional songs he had learned in his various jobs. In the early 1960s, most of Wade’s songs were being sung by the Mountain City Four, a now legendary folk ensemble that included the teenaged Kate and Anna McGarrigle. To this day, the McGarrigles continue to perform Hemsworth’s songs. Hemsworth himself sometimes performed with the group, although he was not a regular member. Hemsworth retired from the CNR in 1977 and moved to Morin Heights, Quebec, a small village in the Laurentian Mountains about 70 kilometres north of Montreal. In 1990, he published a songbook, The Songs of Wade Hemsworth, which led to an appearance at the Winnipeg Folk Festival that was filmed for a CBC Television documentary.
In 1995, at the age of 79, Hemsworth finally recorded his second album, The Songs of Wade Hemsworth, which included all 16 songs from the 1990 songbook. Hemsworth died at Ste. Anne’s Hospital for Veterans in Montreal in 2002, following a lengthy illness. On learning of Wade’s death, Governor General Adrienne Clarkson paid tribute to Hemsworth, saying that his songs were “so much a part of our folklore and so familiar to us that we didn’t realize anyone had written them.”