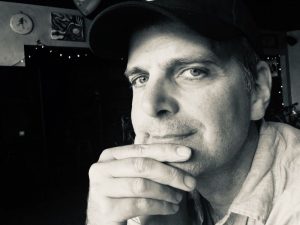 Tobin Stokes (b. 1966)  is regularly commissioned for choral works from adult and children’s choirs. His choral music has premiered in Australia, Canada, England, France, Japan, Mexico, Spain, Sweden, Venezuela, and United States. Versatile and prolific, he composes music for whatever comes his way – ballet, opera, orchestra, choirs, large events, television, film, and theatre. His music has been heard on all the major television stations and networks in Canada, with rebroadcasts in many other countries. Past residencies include a three-year position with the Victoria Symphony in Canada, the International Choral Kathaumixw and the Symphony and Opera Academy of the Pacific. Music for large events includes the opening ceremonies of the BC Summer Games, the XV Commonwealth Games, and various music for the 2010 Olympic Bid, 2010 Canada Pavilion in Beijing, the 2010 Olympic Torch Relay, and both the 2009 and 2010 Cultural Olympiads.

SATB a cappella    –    CP 1807   – duration 2:55
For a commission that would fit into a concert featuring anthems, Tobin turned to a Canadian poem about firewood to create a new idea of a Canadian “anthem”, while pushing conventional word-painting far beyond the ordinary.

Poet, Margaret Lindsay Holton, is a Canadian artist primarily known for her ‘naive-surreal-folk-abstracts’ oil and acrylic paintings, pinhole photography,
short documentary film productions, poetry and literary novel works. Holton is the winner of the K.W. Irmisch ‘Arts Person of the Year’ Award in
2016 from the City of Burlington for her prodigious output of unique Canadian material culture. In 2018, she received the Alumni of Influence
award by University College, University of Toronto and was nominated for the Premier of Ontario Arts Award.

SATB a cappella – KH 036   –  duration 4:35
When the angels proclaimed good news to the shepherds, it must have been shocking and exciting.  Tobin’s rendition of Gloria  (in Excelsis) does a fantastic job of approaching that miraculous moment in the Christmas story – with multi-metric up-tempo rhythms and dynamics.

TTBB a cappella    –    CP 1181
A storm is coming so batten down the hatches! – tie up those boats and run for cover!
This is a rousing song – guaranteed to be a fun sing and a people pleaser.

SSAA a cappella  – CP 1376   – duration 3:20
This unusual composition has been performed around the world. Google the word (if you can spell it) to see wonderful festival performances throughout Europe. Tobin’s song is built on the Basque mythology of witches celebrating the Witches’ Sabbath in the forest, casting spells and brewing magic potions. Halloween fun!

SATB with piano    –    CP 1184   – duration 6:15
This rousing gospel style number has been performed with stunning effect by mass choirs at several international choral festivals. Positive, uplifting, hopeful – it is great fun! The audience at Festival 500 jumped to their feet before the song was over!

SATB a cappella    –    CP 1207   – duration 3:20
An upbeat Cha Cha Cha – this piece is full of Latin rhythm and great fun.  Voices become the percussion section and melody. Listen to the sample!