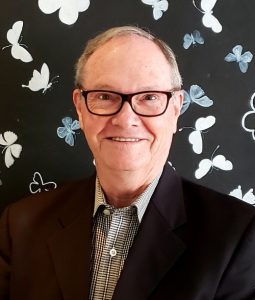 As chair of the Fine Arts Department at Campbell Collegiate, Regina, his choirs enjoyed international acclaim, with workshops and performances in Seoul, South Korea, the People’s Republic of China, the International Jazz Educators Association conference in San Antonio, Texas, and the Montreux Jazz Festival in Switzerland.

In the fall of 1999 Stewart moved to Austin, Texas, where he served for twelve years as choral director at St. Stephen’s Episcopal School. While there, he organized performance tours to New York City, San Francisco, Washington, D.C., Banff, Taiwan, Germany, the Netherlands, Hungary, Austria, the Czech Republic, and China.

Personal honors include the first-ever Downbeat Magazine Award for excellence in music education in 1990, the Saskatchewan Choral Federation’s 1992 Pro Musica Award, and the Saskatchewan Music Educators Association’s 1993 Outstanding Achievement Award. In 2004 Stewart received an award of merit from the Association of Canadian Choral Conductors in recognition of his 25 years of service to choral music in Canada.

Upon retiring from teaching, Stewart served for two years as the director of the newly established Saskatchewan Youth Choir. In addition to composing, he remains active as an adjudicator and choral clinician.

SATB a cappella – CP 1851 – duration 5:25
E. Pauline Johnson (1861-1913), the author of the text of “Autumn’s Orchestra” was born on the Six Nations reserve near Brantford, Ontario, the daughter of a Mohawk chief and an English immigrant mother. As a sickly child, she was schooled at home rather than in a residential school, and her parents encouraged respect for both English and Mohawk traditions. She related strongly to her native heritage, and her earliest poems celebrated that cultural connection.

Although rather shy by nature, she was encouraged to give readings of her poems. As her fame grew these readings extended to cities in the United States and Great Britain. During one of these excursions she met and apparently fell in love with an English musician. “Autumn’s Orchestra” expresses her longing for his “haunting violin”, while at the same time describing her own “orchestra” – that of nature and the sounds of the wind blowing through the trees.

SSA with piano – CP 1850 – duration 2:00
The beautiful and profound prayer attributed to Christ is uttered thousands of times each day around the world. It’s been said that “singing once is like praying twice”. Stewart has composed the perfect setting – a shiny golden nugget of melody and harmony – approachable in sweet-spot vocal registers.

There is Sweet Music Here

SAATB with piano – CP 2086 – duration 2:45
There is sweet music here that softer falls
Than petals from blown roses on the grass,
Or night-dews on still waters between walls
Of shadowy granite, in a gleaming pass;

SAATB with piano – CP 2087 – duration 1:45
Music, when soft voices die,
Vibrates in the memory;
Odours, when sweet violets sicken,
Live within the sense they quicken.

Rose leaves, when the rose is dead,
Are heaped for the beloved’s bed;
And so my thoughts, when thou art gone,
Love itself shall slumber on.