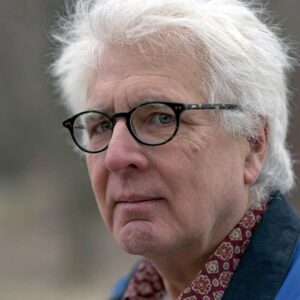 Steven Hardy is a SOCAN award-winning songwriter, composer, and music producer living in London, Ontario. His songs — stylistically reminiscent of the Great American Songbook — are by turns wry and heartfelt, and have been recorded by some of Canada’s favourite artists including Marc Jordan, Murray McLauchlan, and John McDermott, and have been licensed for film and television in Canada, England, Ireland, Iceland, and the U.S.A. He occasionally records and releases his songs under his own name. Steven has also composed music for choir, theatre, dance, and television, including scores for four provincial and national award-winning documentaries by London filmmaker Chris Doty. He has taught songwriting at Western University and is the coordinator of the Songwriters Association of Canada London Regional Writers Group. He holds a Bachelor of Music with Honours in Theory and Composition from Western University. Visit Steven Hardy at stevenhardy.ca
photo by Elizabeth Neill

I Saw an Angel

Just imagine seeing an angel. Some say the powerful angel Gabriel or perhaps Michael was chosen to deliver the good news. And what would the singing voice of an angel actually sound like? – inhuman and ethereal – something unworldly and wonderful. Steven captures the magic of the miracle of 2,000 years ago in this beautiful composition. Easy to sing with sweet-spot vocal registers and intuitive voice-leading – this gem is sure to stir the hearts of singers and listeners.