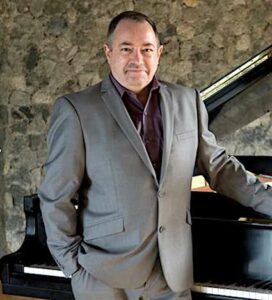 Stephen Smith (b. 1966) grew up in rural Nova Scotia, where he sang and played the piano from an early age. After initial studies in his home province in both piano and organ, he attended the Royal Northern College of Music in Manchester, England. While there, he participated in national and international competitions and won numerous awards and distinctions. Since 1990, Stephen has lived in Vancouver, obtaining his doctoral degree in piano performance from the University of British Columbia and contributing to the musical life of the city as a performer, teacher, composer, choral conductor, and adjudicator. His choral arrangements and compositions have been performed and recorded by choirs from St. John’s, Newfoundland to Seoul, South Korea.

This arrangement recasts the beloved French-Canadian folksong with fresh harmonies and jazzy rhythms. Recorded by musica intima on their CD “clear.”

TTBB a cappella – CP 1012   – duration 4:05
SATB a cappella – CP 1209
This beloved Gaelic song of longing for home is simply but richly scored for four-part mens voices and supplied with a thorough pronunciation guide.

These words of comfort and assurance are set beautifully for an accomplished women’s choir, which is why it’s a part of The Elektra Women’s Choir Series. The use of an artificial mode (C,D,E,F,G,Ab,Bb) and characteristic vocal embellishments give a middle-eastern flavour to this meditative setting of a passage from the “Sermon on the Mount.” Layered vocal lines gradually build and subside, creating two climactic moments within the piece’s six-minute span.

by Stephen Smith
TTBB a cappella – CP 1069   – duration 2:45
Written for the Vancouver Mens Chorus, this piece captures a sultry Spanish atmosphere using vocables, ostinatos, irregular meters, and semitone dissonance. From a soft beginning, tension and excitement build to a climactic chord cluster with tenors on a high B from which they drift down gradually as the piece dies away.
LOOK & LISTEN

If My Love Leaves Me

I once loved a boy… and a bold Irish boy,
who would come and would go at my request.
LOOK & LISTEN

Land of the Silver Birch

Yes, this is the chant you used to sing around the campfire! Stephen Smith has created a whimsical yet beautiful arrangement which incorporates canons, ostinatos, and even a few musical quotations, and which has a featured role for a quartet of soloists.

SSAA with piano – CP 1585   – duration 4:45
Commissioned by Elektra Women’s Choir for a concert they gave in 2016 celebrating Stephen Smith’s 50th birthday, “Pity Me Not” was in a way both the choir’s gift to him and his to them! With a gorgeous text by Edna St. Vincent Millay wedded to romantically wide-ranging vocal lines and a lush piano accompaniment, this piece will be a gift to your choir, your pianist, and your audiences as well!

A fetching piano intro is followed by a solid sea shanty in 6/8 time, with a rousing swing. This arrangement is ideal for choirs at any level of ability.

I must down to the seas again, to the lonely sea and the sky,
And all I ask is a tall ship and a star to steer her by,
And the wheel’s kick and the wind’s song and the white sail’s shaking,
And a grey mist on the sea’s face, and a grey dawn breaking.

I must down to the seas again, for the call of the running tide
Is a wild call and a clear call that may not be denied;
And all I ask is a windy day with the white clouds flying,
And the flung spray and the blown spume, and the sea-gulls crying.

I must down to the seas again, to the vagrant gypsy life,
To the gull’s way and the whale’s way where the wind’s like a whetted knife;
And all I ask is a merry yarn from a laughing fellow-rover,
And quiet sleep and a sweet dream when the long trick’s over.

Song for the Mira

One of Canada’s most enduring and endearing folk songs, Song for the Mira has been covered over 300 times. Anne Murray says it’s one of her favourites. So composer Smith applied all of his skills and passion to this one.

To People Who Have Gardens

SSA a cappella – CP 1070   – duration 1:30
A very pretty madrigal/song with a strong rhythmic element, celebrating simplicity in life and beauty in work.

SSAA with piano – CP 1143
SATB with piano – CP 1141
“Stephen Smith’s rousing arrangement of the Rankins’ hit has been sung and recorded by hundreds of choirs, including a 3000-voice mass choir at the opening ceremonies of the Vancouver 2010 Paralympics. With its message of hope for the future, this song never fails to inspire, and the arrangement is a definite crowd-pleaser.”

SATB a cappella – CP 1054  – duration: 1:45
The basses carry the melody in this arrangement of a classic Scottish folk song.  Intuitive voice leading and sweet-spot vocal registers will make this easy to learn and open to lovely phrasing.