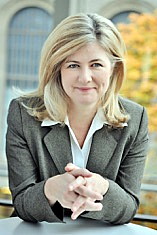 Composer, teacher, performer and church musician, Stephanie Martin (b. 1962) has contributed to the Toronto’s colorful music scene for 25 years. As Artistic Director of Pax Christi Chorale since 1996, Martin has led this 85-voice choral group in memorable performances of the great works of the Oratorio repertoire. Recently in Vancouver, she received an honorary membership in the Elgar Society, and holds the distinction of being the first Canadian woman to conduct a full performance of Elgar’s Dream of Gerontius. Martin served as Music Director of the Church of Saint Mary Magdalene in Toronto for six years, where she recorded several of Healey Willan’s “lost” manuscripts. Resident women’s chant group Schola Magdalena recorded their first CD O Gracious Light.  Associate Professor of music at York University, Martin holds degrees from the University of Toronto and Wilfrid Laurier University, and is an Associate of the Royal Canadian College of Organists.

Arrow and the Song, the

Ave Verum Corpus - (from the set of Motets)

SATB  a cappella  –    CP 1149   – 1:55
This gorgeous a cappella motet rose to the top of the Cypress jury list in 2009. Sweet spot vocal registers and intuitive voice leading make this compelling composition approachable for High school, Church and Community choirs. Please take a moment to listen to this poignant setting of the traditional text.

Cold is the Night

SATB  a cappella  –    CP 1219   – 1:45
“Cold is the night when the stars shine bright”. Folklore and proverbs set to poignant choral music – your choir will really love this composition!

1) Ave Verum Corpus    – 1:55
2) Sicut Cervus   – 1:35
3) O Salutaris Hostia    – 1:20
4) O Sacrum Convivium  – 1:55
Selected by Ruben Valenzuela in the top five for  “Music in Worship”.  He says: Toronto-based Martin offers these motets that are beautifully crafted, with clear voice leading and individual parts that are satisfying to sing. All four motets are of practical value to liturgical choirs, but they can be used in many settings – including the concert hall.
LOOK AND LISTEN

SAB    –    CP 1579    – 3:20
TBB    –    CP 1581
SSA    –    CP 1580
One can order Gloria separately or order the complete Missa Brevis for Three Voices (listed below).
You will be amazed at how much beautiful music can come from three part vocal music, thanks to Martin’s compositional skills. Intuitive voice leading, plaintive evocative harmonies; there is so much a director can draw from the phrases and choirs of all levels of ability will love it.

SATB a cappella  –    CP 1158   – 3:15
The words of the Kontakion were written during the 9th century to bring comfort to those attending a burial service. It is sung faithfully at Anglican funerals services and has become an appropriate text for people everywhere on Remembrance day. Stephanie uses a modern translation and applies a beautiful lush choral setting to the ancient text.

SATB a cappella  –    CP 1170   – 3:55
Many composers have set Psalm 102 to music. Few versions are as effective as this one.  Intuitive voice leading, varied dynamics and appropriately crunchy dissonances will make this a good experience for the choir and meaningful to the listener.

Legend of the Bird

SATB a cappella  –    CP 1252   – 4:15
Stephanie ventures into new creative territory with this composition. In this poem, a passerby on a winter evening notices the statue of a robin and wonders why it is there, who made the carving, and why children are fascinated by it. Surprisingly, the stone bird answers, but only in riddles. It becomes apparent that it is not the spirit of the living bird, not of a human artisan, but of the great Creator who can give life to stone.

Now the Queen of Seasons

O Salutaris Hostia - (from the set of Motets)

O Sacrum Convivium - (from the set of Motets)

Rise Up My Love

Sicut Cervus - (from the set of Motets)

SATB  a cappella  –    CP 1256    – 1:40
From the Psalms – “As the deer pants for the water, so my soul longs after you, O Lord.”  Stephanie’s motets having enduring quality with beautiful melodies, long lines and intuitive voice leading.

SSA, TBB, SAB  a cappella  –    CP 1216   – 1:55
Two wonderful compositions for the price of one and any combination of voices can sound fantastic! Tantum ergo are the opening words of the last two verses of Pange Lingua, a Mediaeval Latin hymn written by St Thomas Aquinas.