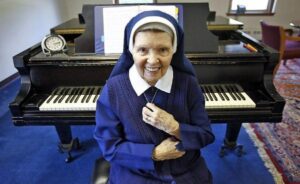 Rosalie and Rosemonde Deck were born in Indiana, part of a musical family with five children, and grew up there and in Pittsburgh. Their father, Ferdinand, played first chair clarinet in the Fort Wayne Symphony Orchestra while working for IBM. Their mother, Gladys, was a singer and voice teacher and the family sang together often. They all had a knack for hearing and singing harmony and became popular as children on local radio and live TV.

Rosalie Deck entered the religious life with the Sisters of Divine Providence in Pittsburgh in 1947 and Rosemonde followed her three years later in 1949. They studied music, sang and performed together and often purchased sheet music at the Boston Music Co. in Boston. One day, a store manager remarked, “You two pick out such interesting music” and asked them to sing a song, “Only A Rose.” They did. The following week, the manager asked them to perform at a benefit performance for a local charity. “The world should hear your voices,” Sr. Rosemonde recalls their booster saying. “She said she was going to call us ‘The Singing Sisters.’ ” Their Mother Superior gave permission and from the 1970s on, they sang at other events in Boston, followed by invitations from nine foreign countries. They learned Hebrew, Yiddish and Ladino (Judeo-Spanish) and sang to thousands of Jewish people in this country and Israel. Sr. Rosemonde had a dramatic lyric soprano voice; Sr. Rosalie, a lyric coloratura soprano. “It made for a nice blend,” Sr. Rosemonde says. “It was very hard work, but we knew what we were doing and we felt good about every place we sang. It was exciting.”

It was their grea privilege to have sung for Pope John Paul II in his private quarters in the Vatican.

Sister Rosalie passed away in 2012. Sister Rosemonde (pictured here) continues to teach privately and plays for Masses and other events at the schools.

God is Walking Beside Me

This lovely comforting anthem would work well in two part voices – in any combination. (SA, TB, SA/TB or even ST/AB)