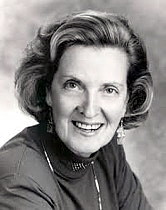 Ruth Louise Watson Henderson (b. 1932) is a Canadian composer and pianist. She was the accompanist for the Festival Singers of Canada under Dr. Elmer Iseler for many years and for the Toronto Children’s Chorus under Jean Ashworth Bartle from its inception in 1978 to 2007. She was also music director for Kingsway Lampton United Church in Toronto from 1996 to 2013.

An associate of the Canadian Music Centre, Watson Henderson’s compositional output includes works for organ, piano, violin, string orchestra, and more than 80 choral pieces. Her works are known for their use of modal and impressionistic harmonies. In 1989 her Chromatic Partita for Organ won a prize in an International Competition for Women Composers in Mannheim, Germany. In 1992 her Voices of Earth won the National Choral Award for Outstanding Choral Composition. In 1996 she received the Distinguished Service Award of the Ontario Choral Federation. Many of her works have been recorded and enjoy international popularity.

SAT8 a cappella – KH 052A – duration 2:30
Written in memory of the famous director, Elmer Iseler, and premiered by the Elmer Iseler Singers – this composition floats with unfolding arpeggios. Very effective dissonances portray the sadness. In Memoriam would work well in any memorial or remembrance service. The composition was designed to be followed by Ruth’s Kyrie Fugue – but works fine as a “stand alone” work.

SAT8 a cappella – KH 052B – duration 4:05
Written in memory of the famous director, Elmer Iseler, and premiered by the Elmer Iseler Singers – this composition demonstrates Ruth’s talent. (Fugues are not easy to write well and this one is very convincing) The composition was designed to followed In Memoriam – but works fine as a “stand alone” work.

Thanks be to God for All His Saints

SAT8 with organ or piano – KH 096   – duration 3:45
Thankful praise in a stunning setting, Ruth really raises the roof with this anthem. See the back page – for the congregation – which can be extracted and put in the bulletin.
Thanks be to God for his saints of each past generation,
One with us still, in one body, one great congregation;
With them proclaim Jesus forever the same,
Author of life and salvation.

Tomorrow Shall be My Dancing Day

Ruth brings new life to this ancient carol with a sparkling piano accompaniment and interesting lilting vocal lines. Women of all ages will love this joyful Christmas selection.