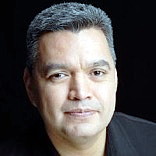 Russell Wallace (b. 1965) is a board member for Warriors Against Violence Society. Russell is a composer, producer and is a traditional Lil’wat singer. Wallace’s music has been part of a number of soundtracks (film, video, television) and theatre//dance productions. He was the composer in residence for the Chinook Winds Aboriginal Dance program from1996-2003 at the Banff Centre for the Arts. He has produced CD’s that have been nominated for awards at the Junos, Canadian Aboriginal Music Awards, and at the Native American Music Awards in the USA. Currently Wallace works and teaches at the Native Education College.
Wallace was commissioned by the Nunavut Government to compose music for the Formation of the Nunavut Territories inaugural Gala in April1999, by the University of Toronto for Aboriginal Music Days in 2000, and by the Westcoast Sacred Arts Society in Vancouver to compose a new choral work with Hussein Janmohamed for the Dalai Lama’s visit in Vancouver in 2004.