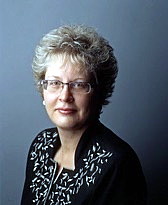 Vancouver-born Ramona Luengen (b. 1960) studied at UBC and went on to receive her Doctor of Music in Composition from the University of Toronto under Derek Holman and Harry Freedman. Having composed extensively in the choral genre, her works have been performed, recorded and broadcast in North America, Europe, Australia, New Zealand and Japan. Her large scale Stabat Mater was named Choral-Event-of-the-Year and Composition-of-the-Year by the Association of Canadian Choral Conductors. Naomi’s Road, an opera for young audiences, has received over 350 performances in North America.
Respected for her work as a composer, conductor and educator, Luengen is a recipient of the inaugural Vancouver Arts Award and the BC Choral Federation’s Herbert Drost Award for distinguished service. She has twice been nominated for the YWCA’s Women of Distinction Award, and was one of four Canadian women composers noted in The Cambridge Companion to Choral Music.

SATB with piano – CP 1873   – duration 4:30
This composition, written in memory of an exceptionally gifted yet humble soprano friend, was inspired by the lyrical poetry of Gregory Orr. The work requires sensitivity to text and a warm intimacy of expression. At m. 59, a suggestion of the stalwart hymn Blessed Assurance begins, eventually finding voice in an intentional gospel-style climax. The textual similarities (“This is my glory, this is my song” in the poem; “This is my story, this is my song” in the hymn) reminds us that even the most humble of lives contribute meaningfully in the glorious fabric of humanity.​

Humble dazzle of autumn.
These leaves on the ground;
each one a page in the Book.
LOOK & LISTEN

How the Blossoms are Falling

SSAA – CP 1314   – duration 5:15
Ramona has given a exquisite setting to Joy Kogawa’s poem and dedicated it to the late Diane Loomer. Listen to the quality recording by the Elektra Women’s Choir.

SATB  –  CP 1047   – duration 3:00
Based on a French poem by Rainer Maria Rilke this piece replicates musically Rilke’s intimacy with the reader, his careful attentiveness and his magical poetic transformation of what is often seen as a common bird. A very gentle, evocative setting, Mésange requires subtle shading and tenderness of tone.

SSAA  –  CP 1038   – duration 5:25
This short mass setting for unaccompanied women’s or treble choir consists of Kyrie, Sanctus, and Agnus Dei. Although not technically demanding, the work requires sensitivity of phrasing and detailed attention to text and word stress. The heartfelt simplicity of expression underlines the inherent reverence and beauty of this liturgical text. Performance note: Missa Brevis can also be sung by a mixed chorus with tenors doubling sopranos and basses doubling altos.

SSAA  –  CP 1010   – duration 4:30
One of the Catholic Church’s four Marian antiphons, is set for unaccompanied women’s choir and solo flute or solo soprano. With thick, luscious harmonies, this is a challenging piece of music, at times requiring 8-part divisi. The work requires a good sense of flow, attention to word stress and a convincing understanding of the pieces structure.

SATB  –  CP 1006   – duration 4:25
This is a challenging work for unaccompanied mixed chorus and alto solo. The biblical text refers to the last hours of Christ on the cross, when “darkness covered the earth.” The work employs a relatively consonant yet contemporary harmonic language and requires controlled, dramatic and well-tuned ensemble singing.

TTBB  –  CP 1036   – duration 4:55
This composition is a setting of the second verse of the beautiful Maundy Thursday text, Ubi Caritas. The works character and melodic structure is strongly based on chant and, as a result, requires a sensitive approach to subtle tempo changes, text and phrasing. Well-balanced sections are essential. After several climatic sections, the piece ends very simply and poignantly with a request for peace and understanding. Level: moderately difficult.