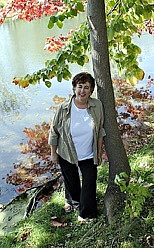 Pnina (Penny) Blake (b. 1951) began her musical studies in Toronto where she received her Associate in Voice from the Royal Conservatory of Music in 1981. After moving to the Niagara region she continued in her musical studies at Brock University and also branched into composition, studying with the eminent composer Srul Irving Glick and with Professor Ronald Tremain and Professor Peter Landey. An accomplished singer, she has performed with the Canadian Opera Company and many choirs large and small.

SATB a cappella  –   CP 1448    – 2:30
‘An old French-Canadian folk tune. Separated lovers keep their love alive with the help of a swallow. The bird flies over the high seas to send the message that they will remain faithful and true to one another’.

Beauty is Before Me

by Penny Blake and Harris Loewen

This lively part song, about the allure of flickering candles, dances in triple meter.  It is especially suitable for Christmas or Chanukah, but can be performed anytime.  The variety of available voicings makes this accessible for almost any choral ensemble.
Also available in SA upon request