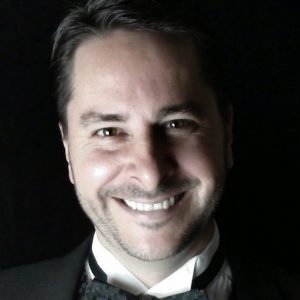 Born and raised in Listowel, Ontario, Canada, Dr. Paul A. Aitken (b. 1970) is now Director of Music & Worship Arts and Composer-in-Residence at the Cathedral of the Rockies in Boise, Idaho where he oversees more than twenty ensembles and a professional staff of six spanning two campuses.

The first-ever winner of the American Choral Directors Association (ACDA) Raymond W. Brock Student Composition Competition for his piece “Flanders Fields,” Aitken is frequently sought after as conductor, composer, and clinician. He has been commissioned by organizations such as the American Guild of Organists, the State of Idaho, the Boise Philharmonic Master Chorale, and many others. Aitken made his Carnegie Hall debut in 2010 conducting his major work, And None Shall Be Afraid; a prayer for peace in 5 movements, with a choir of 200 and the New England Symphonic Ensemble. This major work has now received performances throughout North America and, in 2019, was presented twice in Europe.

Aitken is a member of Choral Canada, and is a lifetime member of ACDA (where he has served at State, Division and National levels, including as National Chair of Music in Worship). Dr. Aitken holds degrees from the University of Western Ontario (1993), Southern Illinois University at Carbondale (1996), and the University of Oklahoma (2006).

For more information about Dr. Aitken and all of his musical output, please visit www.PaulAitkenMusic.com

SATB a cappella – CP 1711  duration 5:45
SATB with piano – available upon request
The 18th century French children’s poem, “Au clair de la lune,” comes alive in this vibrant and colourful setting by award-winning composer, Paul A. Aitken.  The composition won the 2018 Chronos Composition Competition and was premiered by Chronos Vocal Ensemble in January 2019.  An accompanied version will be made available later in 2019.

SA (two part) with piano – CP 1424
Imagine hauling timber out of the bush back in the 1930’s.  The steam donkey was often used to do the heavy lifting – loading trains.  This is a classic Canadian folksong and Paul has brought it to life with this spirited arrangement.

The Lake Isle of Innisfree

The classic poem by William Butler Yeats comes to life with Paul’s sensitive and joyful composition.