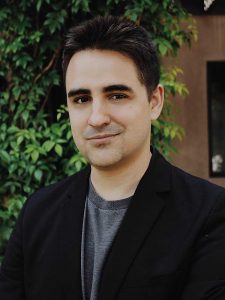 Commended by the Vancouver Sun for his “sophisticated work of such immediate, glittery appeal” and called “a rising star in the constellation of Canadian composers” by Oregon Arts Watch, Nicholas Ryan Kelly writes choral, wind ensemble, and chamber music infused with a sense of cinematic drama.

His choral compositions have been commissioned, performed, or released on CD by many of Canada’s top choirs. He also is the recipient of nearly 20 national and international awards for wind band or choral writing, including the Edwin Fissinger Choral Composition Prize, the Howard Cable Prize from the Canadian Band Association, and the Diane Loomer Award from Choral Canada.

Nick studied music composition at Ithaca College in New York (B.Mus) and the University of British Columbia in Vancouver (M.Mus). He lives in BC’s beautiful Okanagan Valley, where he conducts community ensembles and explores the wilderness with his family.

SATB with piano  –   CP 1771   – duration 5:40
A broad emotional arc and a colourful piano part drive this sweeping piece, which progresses from a delicate, reflective beginning to a joyous climax. The words come from near the end of Walt Whitman’s epic Proud Music of the Storm, and they celebrate music in all its forms.

FLAME IN THE EMBERS

SATB a cappella  –  CP 1770   – duration 4:15
Contrasting images of dark and light abound in this piece, which brings Canadian poet Marjorie Pickthall’s words vividly to life. The composer’s early interest in film score composition is evident in the rich text painting, the varied textures, and the wide dramatic arc of this colourful, challenging composition.

STRANGE IS THE NIGHT

This text comes from a play that doesn’t exist: a book-within-a-book alluded The King in Yellow, a collection of horror tales by Robert W. Chambers (1865-1933). The words to “Cassilda’s Song” are deliberately cryptic: Chambers wrote them to provide a small glimpse into the world of this fictional play, which drives his characters to psychosis when they read the whole thing. (Don’t worry, though: it’s only Act 2 of the play that provokes this reaction, but “Cassilda’s Song” is from Act 1!)

Since the meaning of this text is deliberately vague (and/or nonexistent), it serves here as a vehicle for musical exploration. Chambers never needed to flesh out the location of Carcosa, the identity of Cassilda, or any of the other fantastical entities alluded to in this poem–but this music explores what they could be like.

THINGS OF THIS WORLD

SATB with piano  –  CP 2013   – duration 2:25
A simple piece on a gorgeous text by a living poet, Things of This World explores themes of truth, beauty, and love — and finds these things in unexpected, solitary places.

Love is a ship with its sails full-blown,
a cat confessing the moon,
a single footprint filling with rain
on the edge of an ocean dune.

Truth is a perfect silver bell,
a cow dusk-heavy with milk,
the hand of a woman reaching for thread
of cranberry-colored silk.

Beauty—ah! It’s a goatskin drum,
a swan with only one wing,
a man who is just beginning to try
to use his mouth to sing.