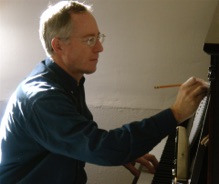 Nicholas Fairbank (b. 1956) lives in Victoria, BC, where he divides his time between composing, performing (as a keyboard player), choral and orchestral conducting, and teaching. After early studies in piano and pipe organ in Vancouver he pursued advanced training in London, England and Paris, France. His composition teachers have included Stephen Chatman and John Celona, and he holds an M.Mus. in composition from the University of Victoria. Mr. Fairbank is currently on the faculty of the Victoria Conservatory of Music, conducts a church choir and two community choirs, and is an Associate Composer of the Canadian Music Centre. His catalogue of compositions includes works for voice, keyboard solo, and various choral and instrumental ensembles.

SATB piano  –   CP 1180   – 2:30
Set to a poem by Walter de la Mare, this tells the sad tale of a brother and sister who pay a silver penny to go for a sail, but a storm blows up and all are lost (including the penny).  Set originally for Victoria’s Viva Youth Concert Choir, it is suitable for a moderately skilled youth or adult mixed choir.

SATB with piano and percussion – CP 1907 – duration 3:40
Set to poetry by the Robert Service, this opening movement of the five-movement Isbjørn! set invokes the silent, lonely land of the North and invites the listener to seek there “what luck betides us.”

SATB with piano and percussion – CP 1908 – duration 4:15
Written by California poet Marcus Lund who, in 2012, travelled with the composer for a month in the Svalbard Archipelago north of the Arctic Circle. His text continues the ideas presented by Service in the previous movement, describing the “immense, sacred silence” and the “faceted prisms” of ice.

SATB with piano and percussion – CP 1909 – duration 3:55
The title is the Norwegian word for polar bear – literally “ice bear” – and with a descriptive text by the composer the piece describes this almost mythical creature of the north, always present but seldom seen.

SATB with piano and percussion – CP 1910 – duration 2:30
In this movement, written in a fragmented and minimalist style, the colours of the snow and the ice are represented by repeated harmonies that shift with the changing colours.

SATB a cappella – CP 1911 – duration 4:20
The final movement of Isbjørn! is a textless a cappella piece inspired by the Aurora borealis. Building from alternating A major and G major triads, the harmonies are coloured polytonally as the piece builds to a fortissimo A major chord, before gradually dying away again as the aurora disappears and we are left with only the night sky and the twinkling Arctic stars. Originally set for trebles, this movement is also now available for mixed voices.