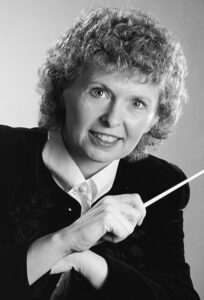 Nancy Telfer is a Canadian composer who has been a choral clinician and guest conductor for many provincial, national, and state organizations throughout Canada and the United States. For many years she has presented workshops on vocal production to both choral conductors and singers.

Since 1979 Telfer has composed over 300 works for choirs, soloists, chamber ensembles, orchestras, bands, and pianists; many of which are published in Canada and the United States. Her music ranges from beginning to virtuoso levels and she has been commissioned to compose music for many fine performers. She believes that all music should delight the ears, capture the imagination of the mind, and feed the soul. Telfer is in demand as a judge and adjudicator, having served on the panel of judges for both the World Choral Olympics 2000 in Linz, Austria, and the International Choral Festival in Riva del Garda, Italy. She has conducted many workshops across Canada and in the USA, and in Singapore, Malaysia, Hong Kong, China, Korea, Australia, New Zealand, England, Scotland, Germany, Italy, Israel, South Africa, Namibia, Argentina, Costa Rica, and Guatemala. Telfer is an associate of the Canadian Music Centre. Some of her books have been translated into Spanish and Korean.

Slow gospel style – antiphonal (call and response) – in sweet spot vocal registers – this composition comes across as authentic and sincere. Choirs will love it and the audience/congregation will be deeply moved.