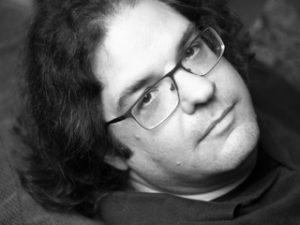 Michael A. McKay is a pianist and composer, originally from Nova Scotia, but now based in Winnipeg. He has a Bachelor of Music degree (double major in Piano Performance and Theory / Composition) from Acadia University as well as a Master of Music degree (major in Piano Performance) from the University of Toronto. His catalogue covers piano music, chamber music, art song, musical theatre, opera, and choral music.
He is the winner of the Manitoba Choral Association’s Frances Seaton Memorial Choral Composition Competition in 2014, was awarded Honourable Mention in the 1990 Nova Scotia Registered Music Teachers Association’s Young Composers Competition in 1990; but most notably, his score for the musical “Clouds” was nominated for a Dora Mavor Moore Award in 1996. His compositions are performed by a number of Winnipeg church and concert choirs and other performing groups, but especially by Camerata Nova and Winnipeg Singers.

My Soul Doth Magnify the Lord

SATB – CP 1734 – 3:10
“My Soul Doth Magnify the Lord” is a lively and energetic setting of the Canticle of Mary, capturing the youthful exuberance of the expectant mother of Christ. Winnipeg Free Press columnist Holly Harris has described it as “sensitively crafted” and “with its syncopated rhythms… [it] became [one] of the afternoon’s most wholly satisfying works.”