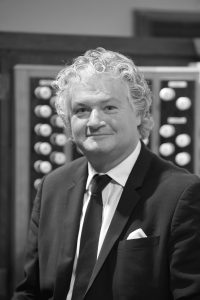 One of Canada’s foremost liturgical musicians, Matthew Larkin has served as an organist and choral director at several of Canada’s prominent churches and cathedrals, including the Church of St. John the Divine (Victoria), St. Matthew’s Church (Ottawa), St. James’ Cathedral (Toronto), Christ Church Cathedral (Ottawa), and St. Thomas’s Church (Toronto). He is formerly the music director of the Ottawa Choral Society, Euphonia Chamber Choir, the Anglican Chorale of Ottawa, and the Larkin Singers. In 2017, he founded Caelis Academy Ensemble, an institution that offers young choristers the opportunity to learn about and perform masterpieces of the cathedral and oratorio traditions, in a choral environment supported by professional adult singers and orchestral players. His choirs have toured extensively, and have performed to acclaim in Canada, the United States, the United Kingdom, and France.

Matthew is a Fellow of the Royal College of Organists, and well-known as an accompanist, composer/arranger, educator, recitalist, and recording artist, and has concertized in recital worldwide, and appeared with several of Canada’s finest orchestras. He is the recipient of an Honorary Doctorate in Sacred Theology from Thorneloe University, and of the HM Queen Elizabeth II Diamond Jubilee Medal for his work with young singers. He is a native of Oxford, immigrating to Canada at a, early age. Matthew was Organ Scholar of Trinity College at the University of Toronto, and attended the Royal College of Music, London. He is represented by Domoney Artists.

SSA a cappella –  CP 1025   – duration 3:15
Written originally for a small church choir, this piece takes the ancient text and sets it with a mystical angularity, but maintaining a beautiful sense of line. Includes a small soprano solo.