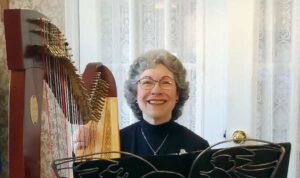 Born and raised in southern Ontario, Mary Lynne’s love of music brought her to the University of Western Ontario where she obtained her Bachelor of Music degree in voice performance. After a few years with the Toronto Elmer Iseler Singers, Mary Lynne and her husband moved to Guelph where she became an at-home mom to two sons, and later, a Music Associate at Dublin Street United Church, directing many choirs. It was here that Mary Lynne discerned a call to informal ministry so she took up the harp and began a harp and voice ministry in the Guelph area. When her husband joined the navy in 2010, their family moved to Victoria for his officer training. During that time, Mary Lynne discerned once again and felt called to ordained ministry. She waited for her husband’s first post, which was Halifax, before beginning her official year of discernment with the United Church of Canada. After that, she began a three-year Masters of Divinity program at the Atlantic School of Theology, graduating in May of 2016. Mary Lynne was ordained in May 2017 and is currently on appointment with Woodlawn United Church in Dartmouth.

Mary Lynne Whyte wrote the melody and lyrics of Born This Night in 2001. Jeff Enns arranged the piano accompaniment and they entered it in the Amadeus Carol Competition where it won an honourable mention the same year. The unison version of the carol was debuted by the Dublin Street United Church Junior Choir and has been performed by the Guelph Youth Singers. Gerald Neufeld, former director of the Guelph Chamber Choir (GCC), arranged the four-part choral version which is the opening piece on GCC’s CD, Christmas in the Royal City (2010).  Please listen to the fine recording to be convinced of the beauty in this composition.  Your choir and your listeners will love it.