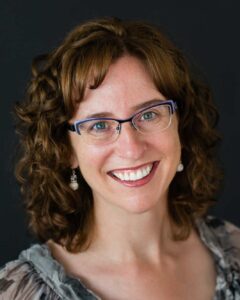 Margaret King (B. Mus. Piano Performance, ARCT Piano Pedagogy, Member of ARMTA) grew up in Swift Current, Saskatchewan where she began her musical studies with her mother, Marilyn King.  During this time, Margaret was privileged to be part of many choral and instrumental ensembles.  From Swift Current, she moved to Lethbridge, Alberta where she earned her Bachelor of Music at University of Lethbridge.  Since moving to Edmonton in 1995, she has been fortunate to be a collaborative pianist with numerous choirs/choral programs including The Cantilon Choirs, Edmonton Children’s Choir, Singspiration, the Greenwood Singers, Ante Meridiem, Vocal Alchemy, Pro Coro Canada, and, most recently, Chandra Tala.  She has also enjoyed collaborating with the voice students of Jolaine Kerley at Concordia University of Edmonton since 2012.   As well, Margaret enjoys teaching piano students of all ages and stages.

Writing music began out of a love of ‘making up stories’ on the family piano at her home in Swift Current.  To date, the majority of Margaret’s music has been written for choirs.  One of the highlights, thus far, was being commissioned to write ‘Migrations’, featuring the Calgary Girls Choir and the Borealis String Quartet, for the 23rd International Kodály Symposium and Festival in August 2017.

TTBB a cappella – CP 1914 – duration 3:35
The Heart of Night text is an eloquent expression of how nature can provide nourishment for the soul; it describes the awe, wonder and, ultimately, peace that can be felt when looking up at a beautiful star-filled night sky.

When all the stars are sown
Across the night-blue space,
With the immense unknown,
In silence face to face.

We stand in speechless awe
While Beauty marches by,
And wonder at the Law
Which wears such majesty.