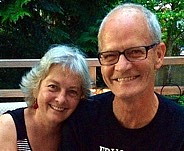 Lynne and Reg Dickson have been making music for and with their community on the Sunshine Coast of BC for over 40 years. Once upon a time, on a day long ago,  a boy came into a restaurant where a girl was  working… he was carrying a guitar…and the rest is history. They moved to Davis Bay in Sechelt in 1972 to raise their three lovely daughters and welcome seven glorious grandkids.

In 1994 Lynne opened the Music Makers Studio offering music classes to preschool children based on the teachings of Orff, Kodaly and Dalcroze.  Soon the classes were expanded to include choirs for children and adults as well as musical theatre, guitar, ukulele, fiddle and penny-whistle.

Over the years they have dedicated many volunteer hours to their community in addition to multiple fundraising events for those in need. Reg entertains in care facilities on and off the coast and can be found playing his harmonica on the seawall in his spare time.  Lynne and Reg have written many songs,  released a single, Light the Lights, and two albums,  Christmas with Harmony and Walk in the Wind and published a children’s book called Kate’s Ice Cream.   They perform regularly as a duo, in a trio and with The Creek Big Band and the ever popular Definitely Diva.  The Dicksons were honoured as “Citizens of the Year” for Davis Bay as well as Sechelt.

Walk in the Wind

SATB  with piano  –   CP 1544   – 2:30
Since 1972 we have been walking the seawall in Davis Bay where there is always a lovely breeze and sometimes a mighty wind.  Many times we have played at the beach, flown kites, watched the birds and enjoyed the company of friends and neighbours. This song is inspired by these walks with our family and is the title track of the album “Walk In The Wind”, which was written and recorded to raise funds for Cystic Fibrosis research in Canada.