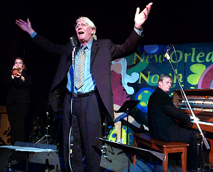 Lloyd Arntzen (b. 1927) has been a singer, music educator and New Orleans style jazz clarinetist in Vancouver since 1946 when he moved there from Saskatchewan where he grew up. Lloyd has sung in in opera and musical comedy as well as in several weekly CBC radio folk music series. As music educator, he pioneered the Karl Orff system of music for children in the public school system. For 15 years he wrote and performed Sing Out, a weekly CBC radio series that was broadcast to the four western provinces. As a jazz clarinetist, Loyd has led and played in New Orleans style bands in jazz festivals across Canada and the United States. He is still active in that music performing with The Dixieland Express from Victoria and with Arntzens: Three Generations and Blackstick. The latter two include his son,daughter-in-law and grandsons; Tom, Georgina, Evan and Arnt. He also does concerts in New York City with his son and grandson; Leif and Miles.

Where the Coho Flash Silver

This was written for my father, Arnt, in 1971 for his 81st birthday, He was still a commercial fisherman operating a one man troller in the Strait of Georgia, now renamed The Salish Sea. The song describes a fabulous day of fishing out of Port Hardy back in the days when the salmon were still plentiful and as  the song says, literally, “ flashed silver all over the bay.” The song has been recorded at least eight times by various artists in Canada and the US after it was brought to the attention of folk music fans by my daughter, Holly.