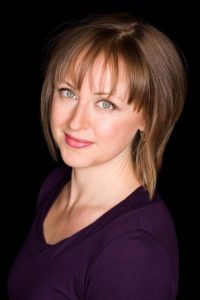 Laura Hawley’s music, often influenced by creative community connections and exchanges, has been described in The WholeNote as conjuring “the forces of nature and its effect on the human spirit.”Laura has been steeped in choral art since childhood, and her output demonstrates her stylistic versatility and craft in writing for all artists from the developing chorister’s voice to the professional choral ensemble. Many of Canada’s finest choirs have commissioned and performed/recorded her works (published by Oxford University Press, Cypress Choral Music, Silent Dawn Music Publishing, Santa Barbara Music Publishing, Rhythmic Trident Music Publishing, and on www.laurahawley.ca), including Canadian Chamber Choir, Pro Coro Canada, Halifax Camerata Singers, Elektra Women’s Choir, Vancouver Youth Choir, Cantiamo Choirs, and Toronto Children’s Chorus. As well as being a composer, Laura is also a highly regarded conductor, educator, pianist, and Canadian choral art advocate. She directs various treble and mixed choirs as well as teaching theory and composition at the university level. ​

Laura wrote this challenging and highly effective trilogy for Elektra Women’s Choir. Great contrast of mood, cultures, and languages between the three movements. An outstanding pianist is needed.  Order the full trilogy or individual movements.

Noël Bourguignon - #1 from the Carol Trilogy

Noel Bourguignon’s haunting melody is set in a misty cloud of accompanying voices, highlighting the mystery of this ancient French carol.

In dulci jubilo - #2 from the Carol Trilogy

Laura Hawley’s treatment of this beloved German carol is lively and exuberant, painting the scene of a sky full of jubilant angels announcing the birth of Christ. This movement would work well for an advanced children’s choir.

Wexford Carol - #3 from the Carol Trilogy

This captivating arrangement of a tune with its roots in England and Ireland is poised and text-centred. A double descant in the final verse provides a soaring climax before a thoughtful ending.

Let's Have Some Music

SATB with Piano  –  CP 2024   –  duration 3:35.
This is such a ‘good times’ song! When Kathleen Glauser (of the Robbie & Kathleen duo group Naming the Twins) approached me about writing arrangements of Robbie’s music, this song jumped out to me at a time when choirs had been unable to gather together for over a year, due to the COVID-19 pandemic. At the time (spring 2020), I was anticipating a resurgence of choral gatherings to come in the fall of 2020, and thought this would be a really fun song to focus on arranging, as a sort of personal celebration looking forward to this, and something choirs could enjoy singing when they returned. I think this piece has a wonderful positive message, and would work well in many different concert programs – it’s such a happy song!
Let’s Have Some Music was commissioned by the Nova Scotia Choral Federation with support from the Estate of Robbie Smith, as part of the Robbie Songs Project – a Nova Scotian songwriter’s legacy.

SATB with Piano  –  CP 2016   –  duration 5:05
For this beautifully poignant song, I brought in a gentle and floating piano accompaniment that reharmonizes some of the melody differently from Robbie’s original harmonies. I have a few different ideas about who the narrator of my arrangement could be, and encourage performers to come up with their own interpretation and meaning. To help with this, I also suggest listening to the original recording by Naming the Twins, Robbie and Kathleen’s duo group, to compare and contrast with my arrangement. You can find their recording on YouTube.
Lincoln Cathedral was commissioned by the Nova Scotia Choral Federation with support from the Estate of Robbie Smith, as part of the Robbie Songs Project – a Nova Scotian songwriter’s legacy