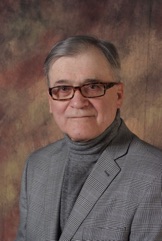 Kenneth Nichols (Hugh). Composer, pianist, teacher, b. Pincher Creek, Alta, 1936; ARCT 1958, Associate in music (Alberta) 1960, Licentiate Diploma (Toronto) 1961, M MUS (Indiana) 1967, PH D (Minnesota) 1981. He studied piano with his mother, Edna Nichols, and with Buela Doney; he also was a choir boy and soloist at All Saints Cathedral under Vernon Barford in Edmonton. He studied piano with Pierre Souverain at the RCMT (1956-61), Boris Roubakine at the Banff SFA (1960), and Frederick Baldwin at Indiana U, and theory and composition with Paul Fetler and Dominic Argento at the University of Minnesota. He began teaching at Brandon University in 1962. He won several performance and commissioning grants from the MAC in the 1980s. His PH D thesis was titled ‘The orchestral compositions of Harry Freedman: a parametric analysis of major works written between 1952 and 1967.’ He has adjudicated in Manitoba and Saskatchewan, examined for the WBM, and judged composition competitions for the MRMTA 1983-5 and the BCRMTA in 1991.

This joyful anthem is perfect for the Christmas season or any time of year – the message is timeless! Also know as the Nunc Dimittis – this piece is about the moment Simeon, who resides in the temple, sees the baby Jesus for the first time and realizes that He is the promised Messiah. Kenneth uses sophisticated, yet approachable composition techniques to bring scripture to life.