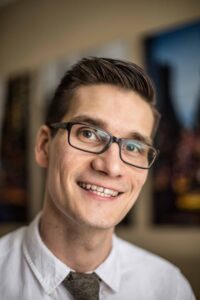 Kenley Kristofferson is a composer for concert band, concert choir, symphony orchestra and video games. Growing up as a band kid in Gimli, MB, he later went on to complete his B. Mus and B. Ed degrees from the University of Manitoba and his M. Mus in Composition from Brandon University, studying under Dr. T. Patrick Carrabré. He is currently teaches in the Performing Arts Department at Lord Selkirk Regional Comprehensive Secondary School in Selkirk, MB.

His choral music has been published by Cypress Choral Music in British Columbia while his concert band music is published by Grand Mesa Music Publishers, C. L. Barnhouse, and Eighth Note Publications. His work has been recorded by ensembles like the Vancouver Chamber Choir, the Bowling Green State University A Cappella Choir, the Cleveland Symphonic Winds, the Arizona State University Wind Ensemble and the University of Manitoba Wind Ensemble. He has arranged choral music for Camerata Nova and been performed by Prairie Voices. His work, The Meeting Place, was selected as the winner of the 2016 Howard Cable Prize in Composition, presented by the Canadian Band Association.

His commercial music has found its way into video game franchises such as Betty Boop, Disney’s DuckTales, KRE-O and Warhammer 40,000. The score for his short film on the early life of astronomer Carl Sagan, Star Stuff, was nominated for Best Original Score in the “Short” category in the 2016 International Sound and Film Music Festival in Croatia.

Nothing Gold Can Stay

by Kenley Kristofferson
SATB a cappella – CP 1939 – duration 3:55
When finding poetry to set for choral music, it is important to me that the text not only be expressive, but also have layers of interpretation. Robert Frost’s Nothing Gold Can Stay meets both criteria in spades. On the surface, the text is quite bleak, highlighting the fleeting nature of time and how all our most beautiful moments eventually slip away – that nothing lasts forever. But, the more I read it, the more the text reminds me to cherish moments and to be present with those I care about. While nature’s first green is her hardest hue to hold, it is still in fact, gold. While the flower lasts but an hour, we need to appreciate that we have a flower at all.
Upon further reading, I feel a sense of value in these objects or moments ending. The impermanence of life invites us to be grateful for the time we have it. Whether it is our youth or a summer vacation, time with friends or a family meal, playing with a toddler or sharing stories with your grandparents.This poem also reminds me that there is a surplus of beauty in the world and, while something ends, it is never the last beautiful object or moment. “Dawn goes down to day,” but a new day is only tomorrow. – Kenley
LOOK & LISTEN

by Kenley Kristofferson
SSATBB with piano – CP 1208 – duration 3:50
An avid Carl Sagan fan, Kenley has created this powerful work for good choirs. “This choral anthem is wrapped in warmth, thick harmonies and lyrical melodies as it manifests the connectedness of life, the Earth and the stars through a united chemistry. Most stars are made of the three lightest elements in the universe: Hydrogen, Helium and Lithium. Upon their death, some smaller stars simply burn out and fade away, but the elder and more massive stars do something entirely different. These cosmic titans cave into their core, creating enormous heat, light and energy not seen since the Big Bang almost fourteen billion years ago.

But, as these stars collapse, the new heat and density enables their lighter elements to be forged into larger, heavier and stronger ones like Nitrogen, Carbon, Oxygen, Iron and so forth. This process is call nuclear fusion and, in short, it fills the universe with a veritable something rather than nothing.

As this fertile star gives way, it gets heavier and denser until it compresses to a point where it can be compressed no further and is brimming with energy. Unable to sustain that form, it explodes through space and seeds the universe with heavy elements. These elements go on to attract to one another through space and gravity to form asteroids, planetoids and sometimes planets. Earth is one of these planets. From the calcium in our bones to cobalt in our mountains, all things are connected through a common solar origin. The stellar nursery in the night sky reminds us that all stars, all flowers, all mountains and all life are all just threads in a cosmic tapestry – each thread is important in itself, but when woven together, the picture is not only more clear, but also more beautiful.”  Kenley