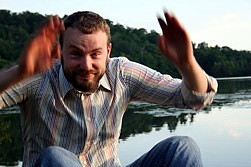 Conductor, Composer, Clinician, Vocalist, and Violinist, John Wiens (b. 1975) has been a regular performer across Canada for 15 years. Based in Montreal, he is the Artistic Director of The Montreal Consort, Ensemble Bellechose, and Chorale Philomela, he is also the Director of Music at St. Matthias Anglican church.  In 2011 St. Matthias released it’s first album in 20 years, Te Deum Laudamus, to great acclaim across North America.

A sacred music specialist, John holds degrees in singing, conducting, and violin from McGill University, the University of Sherbrooke, and CMU respectively.

Wade in the Water