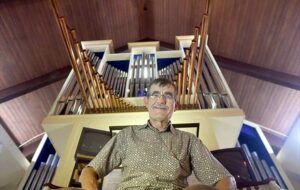 Jan Overduin has been active as a choral conductor. He founded the Niagara Chamber Choir, and conducted the Menno Singers (fifty select voices) for eight years, and the Mennonite Mass Choir (400+ voices) for five years. Jan Overduin was University Organist and Professor of Organ and Church Music at Wilfrid Laurier University in Waterloo, and conducted the WLU Chapel Choir until his retirement in 2003. He served as Director of Music at St. Matthews Lutheran Church in Kitchener for over 12 years. Since 2001 he Director of Music at First United Church in Waterloo, a position he held there also from 1967 to 1973. During his recent tenure at First United, he oversaw the purchase and installation of a mechanical-action pipe organ and organized a regular concert series.

God, My Supporter and My Hope

Based on Psalm 73 with a text by Isaac Watts, this powerful anthem proclaims the love and majesty of God.