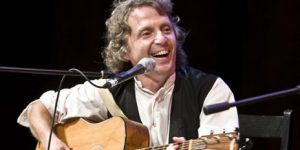 JAMES GORDON has had a remarkably diverse 40-year career in the Canadian entertainment business. As a solo singer-songwriter and with the ground-breaking trio Tamarack, he has released over forty albums, and has toured relentlessly around the world. Gordon has written for symphony orchestras, musical theatre and dance works, film scores, and for more than ten years was heard on CBC radio as songwriter-in-residence for the Basic Black and Ontario Morning programs.

His song Mining For Gold was featured in the John Sayles film – ”Silver City”, and was included on the classic Cowboy Junkies album The Trinity Sessions. Gordon’s classic Frobisher Bay has been recorded by more than 100 different acts world-wide. James tours as a solo performer and with his sons. Between tours, James is a record producer, playwright, community activist, Guelph City Councillor and theatre director.

SATB   –    CP 1319
SSA   –   CP 1699
One of the very few folk songs from Canada’s frozen North. It’s the tale of the captain of a whaling ship who decides to push the late summer season to catch “one more whale”, but finds himself and his crew frozen in for the winter. Diane’s arrangement captures the mood of sailors who won’t see their home and families for another nine months, if at all.
LOOK & LISTEN

My Canoe Runs on Water

Talk about environment friendly! – and healthy to boot. Choirs will love this upbeat folk tune by James Gordon. Nickel adds another Canadian classic to fit the theme – “My Paddle’s Keen and Bright”.