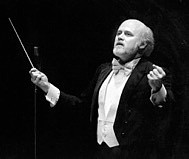 James Fankhauser (b. 1939) recently retired as Professor of Music at the University of British Columbia and Music Director of the Vancouver Cantata Singers. His choirs have frequently represented Canada in the BBC’s International Choral Competition, where the Cantata Singers took first prize in 1981 and the University Singers took third in 1995. Also in 1995 his University Singers tied for first at the Marktoberdorf International Chamber Choir Competition. Rehearsals and performances as a student with Robert Shaw and Robert Fountain secured his life-long interest in concepts such as “music-as-inevitability” and “perfect time as well as perfect pitch.” Studies with John Nelson, Music Director of the Aspen Choral Institute, provided a challenging and thorough “tune-up” in the technical clarity of conducting. A degree in musicology at the University of California, Berkeley, and a Fulbright Grant to study at Oxford University contributed to his sense of musical style and performance practice. Career highlights include conducting the highly-acclaimed National Youth Choir of Canada in 1990, receiving a JUNO nomination in 1994 and winning the ACCC’s 1994 “Outstanding Choral Recording” award.

A lovely tune, fine lyrics, arranged by a master craftsman – this is a sure winner for any Christmas concert. Provides a chance for your best soloist to shine (written for Tenor).
LOOK & LISTEN

SATB  $5.75   CP 1391   – duration 6:55
A collection of three folk songs arranged by Jim Fankhauser for his University Choir — very suitable for encore use. They are fairly simple but do require lots of energy and big smiles.
Contains: 1) On Monday I Never Go to Work, 2) Shootin’ With Rasputin and 3) Good Fish Chowder  (see below)

On Monday I Never Go to Work - Risky Encores #1

arr. James Fankhauser
SATB  –   CP 1392   – duration 2:55
Jerry Mulligan dropped his cap in the bowl of chowder! What a mess! Have a riot with with this encore.
LOOK & LISTEN

Virgin Mary Had a Baby Boy