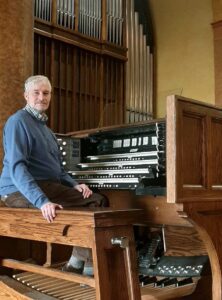 Born in the UK, of Scottish ancestry in 1970, Ian William Bevell GRSM (Hons) LRAM (Organ Teacher) is an alumnus of the Royal Academy of Music, London, UK. He studied the organ with Christopher Bowers-Broadbent, and Church Music studies including choral conducting with Patrick Russell. He was awarded the Lady Wallace Budge Prize for organ improvisation in 1989. Ian has a wide ranging knowledge of Organ and Choral repertoire, as well as Church music of many styles.

After an eighteen year career in teaching, Ian decided to emigrate to Canada in 2009, gaining Canadian citizenship in 2015.

Over a church music career spanning nearly 30 years, Ian’s approach to choral composition has been to compose for choirs of all sizes and abilities. This includes music for children’s and Parish church choirs, all the way through to Cathedral-style choirs. Ian enjoys creating music that is written in an abundance of styles and for a wide range of abilities; not only in English and Latin, but occasionally in other languages as well.

All Things Bright and Beautiful

SATB with piano or organ – KH 001 – duration 3:00
All things bright and beautiful, all creatures great and small.
All things wise and wonderful, the Lord God made them all.

Away In a Manger

A beautiful and flowing version of the timeless Christmas classic suitable for choirs of all abilities.

For the Beauty of the Earth

SATB with organ or piano – KH 031 – duration 3:15
Pierpoint was 29 when he wrote this poem; he was mesmerized by the beauty of the countryside that surrounded him. Ian has created an anthem to the text in antiphonal style – approachable and deeply meaningful with undulating arpeggios in the keyboard accompaniment.

Gentle Mary laid her child lowly in a manger;
There he lay, the undefiled, to the world a stranger

This arrangement is a melodic gospel barn burner sure to thrill your audience. Great fun to sing with a very playable piano part.

It Came Upon the Midnight Clear

It came upon the midnight clear, that glorious sound of old,
from Angels bending near the earth to touch their harps of gold.

Just As I Am

Just as I am, without one plea,
But that thy blood was shed for me.
And that thou bidd’st me come to thee,
O Lamb of God, I come.

This lovely setting of the beloved text sings itself.
O little town of Bethlehem, How still we see thee lie!
Above thy deep and dreamless sleep The silent stars go by

There is a Green Hill Far Away

This beautiful anthem is ideal for the Lent Season or any time of year. Sweet spot vocal registers and intuitive voice leading will help the singers to progress beyond “dots on a page” quickly and bring the poignant text to life. Singers and listeners will be encouraged and edified by the positive message.

This is a glorious and joyful anthem – grandiose in scope and easy to sing in sweet-spot vocal registers.
While joyful thus his praise we sing,his mercy we implore,
Into his palace bright to bring and keep us evermore.
All glory to the Father be, all glory to the Son,
All glory to the Holy Ghost, to there, while endless ages run.