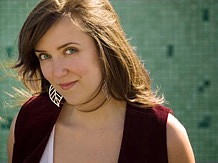 Hilary Grist (b. 1980); Vancouver singer-songwriter, and pianist.  Her dulcet, velvet voice and signature firefly folk style dipped in dreamy, art-pop can evoke emotion with ease and has made her music a favourite on CBC Radio and tv shows like Grimm (NBC), Being Human (NBC) and Degrassi (MuchMusic). Her quirky creative flare with visual art and music videos have also garnered admiration from around the globe. She has released 2 Eps, 2005 On My Way, 2009 Little Ditties, and 3 full-length albums, 2010 Imaginings, 2014 Come & Go, and 2015 Tomorrow is a Chance to Start Over. Her most recent release, Tomorrow is a Chance to Start Over, is a beautiful children’s picture book with accompanying album which has earned her a nomination at the Canadian Folk Music Awards as well as the Western Canadian Music Awards.

Tomorrow is a Chance to Start Over

SATB with piano  –   CP 1443   – 3:35
SSAA with piano  –   CP 1504
Tomorrow is a Chance to Start Over is a touching and optimistic piece about the beauty of second chances. Elegant harmonies bring the comforting message and transport the listener to a place of hope and redemption. The lovely melody brings the lyrics to life.