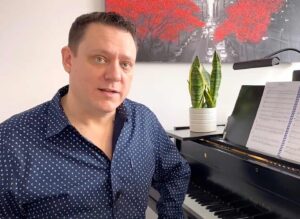 Glen Rhodes is a lifelong musician, performer, improviser and composer. Glen wrote music for the Oprah Winfrey Show from 2005 until the show ended in 2011, and his music can still be heard today on network television on many shows including Dr. Oz and Dr. Phil, as well as extensively on the Oprah Winfrey 20th anniversary DVD box set. Primetime specials featuring his music include the Oprah Legends Ball and the Martin Luther King 45th anniversary special. As a computer scientist, Glen has honed the craft of using computers to create realistic and beautiful orchestral music that sounds nearly indistinguishable from live orchestral recordings. His orchestral album, “Inward Journey”, can be heard on Spotify. His recordings of instrumental tracks from Les Misérables have been heard on Britain’s Got Talent. As a musician, Glen spent several years gigging at venues in Toronto playing keys in a band.

Who We Are is a work in response to the greatest issue of our time, and our history: Human induced climate change. It explores a narrative that features three main “actors”: Humanity as it stands today, the children who are the future and will inherit this planet, and the Earth herself, the soprano solo of Mother Earth.

It is a story of beauty, fragility, darkness, greed, humility, innocence, hope and ultimately redemptive optimism. It also weaves a past, present and future tale that draws inspiration from works like Dickens’ A Christmas Carol. The way it was, the way it is, the way it could be, and the way we hope it will turn out. Throughout, the elements of fire, water, air and earth are also explored.